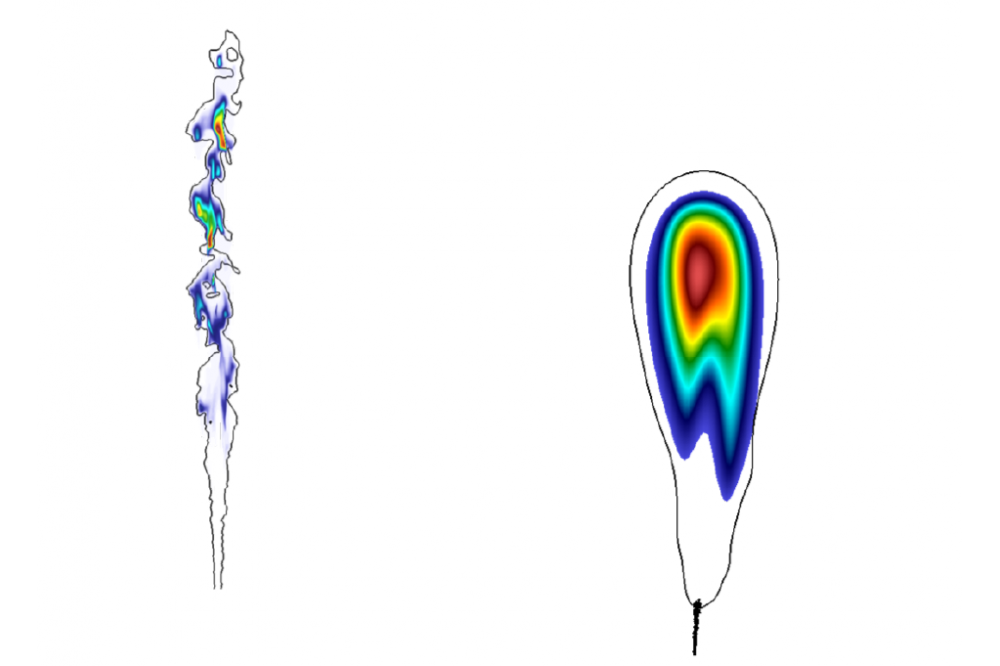 The formation of pollutants in direct injection engines is a field of research with high practical importance. In front of this background, this project deals with the simulation of high-pressure spray injection and the subsequent ignition and pollutant formation, i.e. soot and NOx. Since these processes are strongly determined by the mixing processes of the evaporated liquid fuel with the gaseous environment, Large Eddy Simulations of the turbulent flow developing during the injection process will be performed. In especial, large scale turbulent structures are resolved by this methodology, recuing the modelling effort while increasing the computational time due to the need of sufficiently high spatial resolution. The results of these detailed simulations are on the one hand used to analyse the cause-effect chain in pollutant formation in high-pressure spray flames. On the other hand, these results can serve as reference data for the adaption of models with lower computational cost but higher amount of empirical model parameters. The results are verified by comparison to experimental data. While the current part of this project dealt successfully with the implementation of the submodels in the modelling setup including Large Eddy Simulations of a turbulent piloted jet flame with gaseous fuel to validate the soot model coupling, simulations of the entire highpressure cause-effect chain were performed by means of ensembled averaged injection events so far. The highly resolved Large Eddy Simulations are planned for the follow-up period.

The injection of liquid fuel in a gaseous environment represents a two-phase problem. The initially compact liquid phase disintegrates shortly after the nozzle exit into ligament structures due to its high velocitiy and subsequently into smaller and more spherical droplets. The resulting disperse liquid phase can be characterized by a statistical representation in terms of a number density function which is discretized by stochastic particle in the current investigation, i.e. parcel representing a certain number of droplets with equal quantities. The underlying continuous gas-phase is described by the conservation equation for mass, momentum and enthalpy in an Eulerian frame of reference which are discretised by means of the Finite Volume Method. Hence, the gas carrying domain is discretized by control volumes, on which local changes are adapted to in- and out-going fluxes in order to fulfill the conservation of the mentioned quantities. Coupling between both phases is obtained by source terms, incorporating non-resolved exchange processes like drag, and heat and mass transfer. The latter are described by empirical correlations for single droplets. The ignition and combustion process remain unresolved at its smallest scales. Since combustion chemistry is fast and takes place in thin flame-sheets in the current application, equations for the flame structures can be solved decoupled from the 3D-CFD within an in-house C++ code and its solutions are assembled within a look-up table for read-into the CFD by parametrizing the flame structure by a reduced set of control variables. This Euler-Lagrange framework for representing the liquid-gas interaction including combustion is extended by the incorporation of a third phase building up when particulate matter, i.e. soot, is formed as result of the combustion process. Similar to the liquid phase, this additional solid phase is dispersed and can be characterized by a number density function, too. In contrast to the description of the liquid phase, a description of this NDF is performed in an Eulerian frame of reference by means of the methods of moments. In this method, the NDF is represented by a set of its statistical moments (e.g. mean value, variance). Transport equations for these moments are solved for in the finite volume context where source terms for closing the system of equations are evaluated utilizing an in-house C++ code during runtime.

In the current project, the sub-models needed for injection, evaporation, ignition, combustion and pollutant formation were successfully implemented in the 3D-CFD code (subproject 1). In especial, a detailed validation of the soot model coupling was performed by means of Large Eddy Simulations of a natural gas/air turbulent piloted jet flame (subproject 2). The selected test case (Delft Adelaide Flame III) is a benchmark of the International Sooting Flame (ISF) workshop. Therefore, detailed experimental data are available for validation purposes. Simulations up to approximately 7 million cells have been conducted, underlying the need of a High-Performance Computer (HPC). It was able to show, that the predicted time averaged fuel/air ratio is in close agreement with the experimental data as well as for other thermo-chemical quantities like temperature or species distribution. Furthermore, the accuracy of the resulting soot volume fraction distribution agrees with the state of numerical research for this flame and hence in acceptable agreement with the experimental results. Based on the validated modeling approach, simulations of ensemble averaged injection events were performed (subproject 3). The validation of these results based on experimental data for various spray describing properties like vapor and liquid penetration as well as ignition delay time and spatially integrated signals of combustion and soot relevant signals were successfully performed. The validated simulation framework enabled a cause-effect chain simulation with special focus on the influence of preferential evaporation of a two-component fuel mixture of n-Heptane and n-Dodecane along the entire cause-effect chain.

The results obtained by the high-pressure spray flame cause-effect chain simulation framework clearly showed the importance of incorporating information about the inner nozzle flow information. For the injector under investigation, a deviation from the injector axis to the spray axis was clearly visible, which’s determination without nozzle flow information is not possible. Furthermore, it is determining the spray spreading angle, influencing the air entrainment and hence the local air/fuel ratio. By comparing the sprays resulting from n-Dodecane as fuel with them form n-Dodecane/n-Heptane mixture (10% / 90% by mass) it was observed, that the resulting mixture inhomogeneities averaged over plane of stoichiometric air/fuel ratio develops similar for both fuels and seems to be mainly determined by the injector and the injection system. Due to the difference in the chemical structure, the influence of mixture inhomogeneity on the flame structure and hence on the ignition process interacts with the chemical source term of combustion, which is characteristic for each fuel. When comparing the global ignition delay time of the sprays, their difference is qualitatively in accordance to the findings obtained by comparing the fuels homogenous ignition delay times but their absolute value is influenced by the effect of mixture inhomogeneities. Since the effect of mixture inhomogeneities plays a major role in the ignition process, it should be described as accurate as possible. Hence, Large Eddy Simulations are planned to be performed in a subsequent project to increase the quality of the predictions and to proof the findings described above.