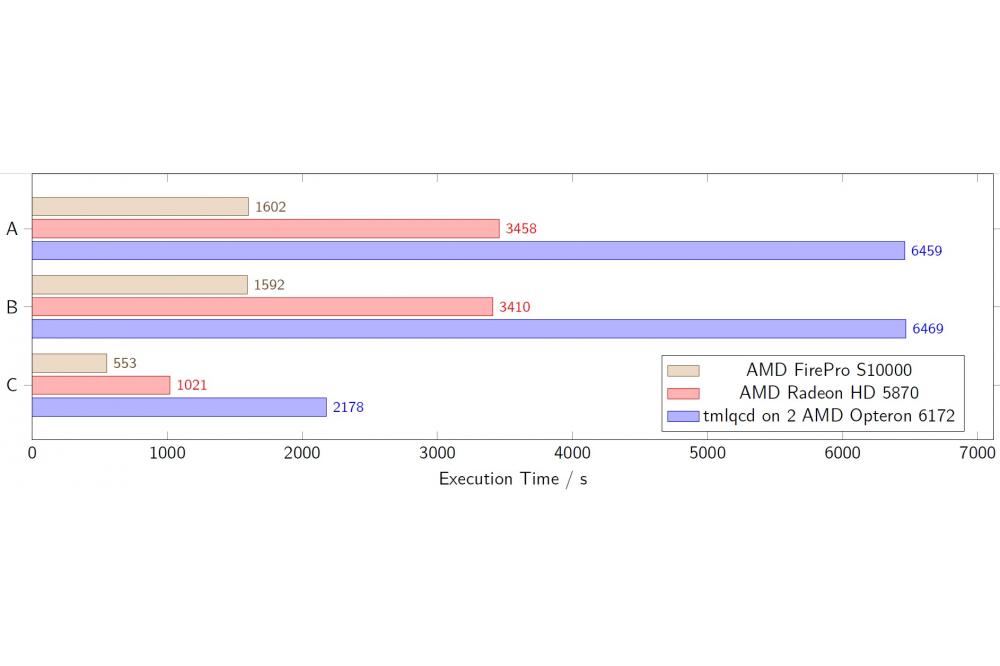 The strong force is described by Quantum Chromodynamics (QCD). This theory has been experimentally tested to be a valid description of the interactions of quarks and gluons, the elementary constituents of hadronic matter. In particular, QCD is relevant for physics investigated presently at the LHC at CERN or in the near future at FAIR in Darmstadt.

One important research topic is the phase diagram of QCD. It is known that at high temperatures hadronic matter undergoes a phase transition from confined to a deconfined phase (quark gluon plasma). The nature of this transition at non-zero chemical potential μ is not known, and its clarification is one goal of ongoing experiments. In particular, the possible existence of a critical endpoint (CEP) is of interest. In the energy ranges of interest, QCD is inherently non-perturbative and a perturbative approach to QCD is in general not possible. Lattice QCD (LQCD) provides an alternative and well-established non-perturbative approach by formulating QCD on a spacetime lattice with lattice spacing a. LQCD can then be studied using numerical methods.

Results are extrapolated to the continuum limit, a = 0. A certain freedom in choosing the lattice version of QCD exists. One particular formulation of LQCD employs Wilson fermions. In addition, we use Twisted mass Wilson fermions within the tmfT collaboration. Present lattice simulations algorithms are based on Monte Carlo sampling and require an enormous amount of computing power. Simulating at small quark masses increases the numerical costs. Computing clusters like the Loewe-CSC are therefore an essential tool, where a lot of CPUs can be used in a parallel fashion to carry out the computations. Apart from this traditional approach, Graphic Processing Units (GPUs) are used for LQCD application since recent years. GPUs offer a very promising performance per cost ratio which comes more and more into focus. Ever since, the Loewe-CSC has been equipped with GPUs, and especially after the hardware upgrade in 2014 this section constitutes a relevant part of its total computing power. However, third party LQCD solutions predominantly focus on NVIDIA hardware.

To enable full utilization of the AMD based Loewe-CSC cluster, we have developed the OpenCL based LQCD application cl2qcd.[1]  OpenCL is a vendor independent programming language. cl2qcd shows very good performance and utilizes GPUs in an optimal way. See Figure 1 for a comparision against a reference CPUbased code[2]. Here, both GPUs used in the Loewe-CSC show a significant speedup compared to two full CPU nodes. Investigating QCD at non-physical parameters is a promising approach to determine its phase diagram, because observations made here allow for predictions and constrains for the physical point.

A point of particular interest is the chiral limit of two flavours of massless quarks, as a CEP would be favored if the transition here is of second order. However, this point is not directly accessible by lattice simulations and therefore a rigorous proof has not been given yet. Clarifying this issue is the central point of our current efforts at μ=0 using twisted mass fermions.[3]

An alternative approach to this issue can be pursued by simulating at purely imaginary values μ. This circumvents the sign-problem of QCD, which renders LQCD simulation algorithms ill-defined at nonzero (real) μ. In this region, QCD possesses additional symmetries, which allow for strong constraints on the physically relevant region.

We are currently mapping out the phase structure of QCD at imaginary μ, where we have already found agreement with existing studies.[4]  We are currently extending these investigations towards the continuum limit.