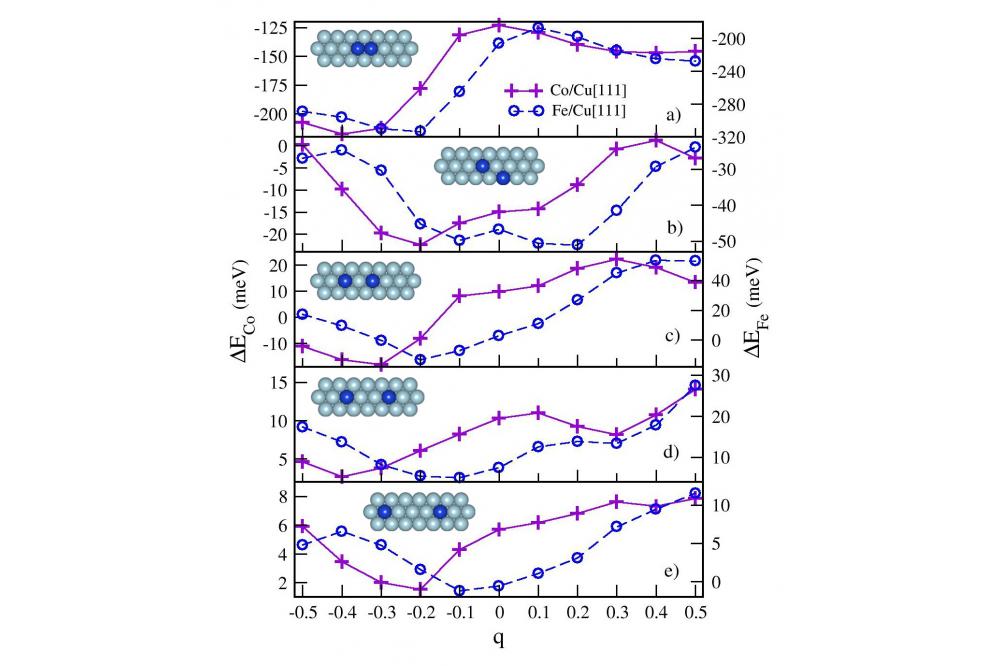 Fig.1: Magnetic exchange interaction energy ΔE = EFM − EAF of Co and Fe impurities at the Cu(111) surface as a function of the surface charge per atom q for different impurity positions.

Fig.1: Magnetic exchange interaction energy ΔE = EFM − EAF of Co and Fe impurities at the Cu(111) surface as a function of the surface charge per atom q for different impurity positions.

Small particles of magnetic transition metals open multiple perspectives of technological developments in storage media and spin-electronic devices. For the applications the interactions between the particles play a central role. In this project we investigate how these interactions can be manipulated by means of static external electric fields, which have the remarkable advantage of being very energy efficient. Electrical control of magnetism at the nanoscale is a research area with a large spectrum of applications, for example, spintronics, data storage, and recording. Important advances have been achieved towards the reversible tuning of magnetism controlled by means of external electric fields (EFs).

In this work the substrate-mediated magnetic interactions between Co and Fe impurities deposited at the Cu(111) surface have been theoretically investigated as a function of external surface charging. The modifications of the interactions as a result of the metallic screening and charge rearrangements are determined theoretically by using the Green's-function Korringa-Kohn-Rostoker method. As in the neutral Cu(111) surface, the effective magnetic exchange coupling ΔE between impurities shows Ruderman-Kittel-Kasuya-Yosida (RKKY) oscillations as a function of the interimpurity distance.

At large interimpurity distances, the wavelength of the RKKY oscillation is not significantly affected by the value and polarity of the external surface charge. Still, important changes in the magnitude of ΔE are observed. For short distances, up to fourth nearest neighbors, surface charging offers remarkable possibilities of controlling the sign and strength of the magnetic coupling. A nonmonotonous dependence of ΔE, including changes from ferromagnetic to antiferromagnetic coupling, is observed as a function of overlayer charging. These results open new possibilities of manipulating the magnetic interactions in surface nanostructures. Further investigations have been devoted to the effects of external EFs on the magnetic state and substrate-mediated magnetic coupling between Mn dimers on the Cu(111) surface.

The first principles calculations of the Kassel group show that a change in the ground-state magnetic order, from antiferromagnetic (AF) to ferromagnetic (FM), can be induced within an isolated Mn2 on Cu(111) by applying a moderately strong EF of about 1 V/m. The magnetic exchange coupling between pairs of dimers displays RKKY-like oscillations as a function of the interdimer distance, which depend significantly on the magnetic order within the dimers (FM or AF) and on their relative orientation on the surface. Moreover, it is observed that applying EFs allows modulation of the exchange coupling within and between the clusters as a function of the intercluster distance. At short distances, AF order within the dimers is favoured even in the presence of EFs, while for large distances the EF can induce a FM order. EFs pointing outwards and inwards with respect to the surface favour parallel and antiparallel magnetic alignment between the dimers, respectively. The dependence of the substrate mediated interaction on the magnetic state of Mn2 can be qualitatively interpreted in terms of the differences in the scattering of spin-polarized surface electrons.