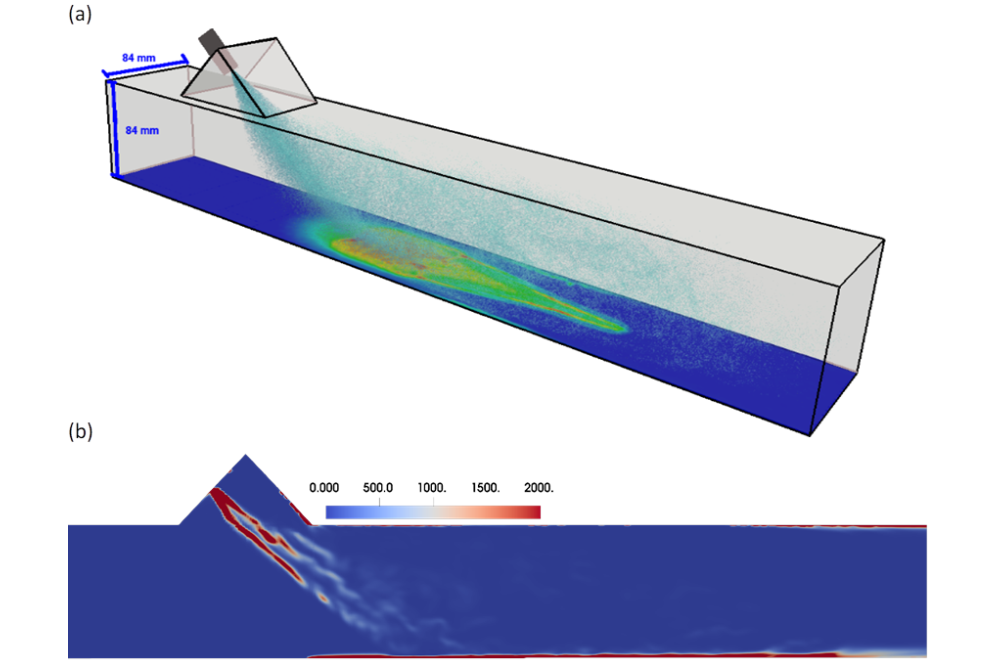 The second law analysis based on the entropy generation and exergy losses of the turbulent multiphase reacting flow is the objective of this project. First of all, the exhaust gases exergy losses as well as entropy generation source terms were introduced in single phase flow. The second law analysis will be extended to the turbulent reacting multiphase flow. This requires the modelling of the turbulent reacting spray, which includes multiple interwoven processes, such a breakup, evaporation and turbulent dispersion. The large eddy simulation (LES) approach is used to investigate turbulent spray while the accurate representation of the complex turbulence-chemistry-particle interaction is realized by an Eulerian-Stochastic Field (ESF) method. Since the modelling of turbulent sprays involves many complicated processes, High-performance computing is required.

The open-source C++ library OpenFOAM version 16.12, in which a new solver based on Eulerian stochastic field (ESF) method coupled with FGM has been implemented, is used. The method (ESF/FGM) is applied on single a phase flow to compute the exhaust gases exergy losses additionally to the entropy generations source terms. The study is extended to the multiphase turbulent using two steps reaction mechanism with ESF method. The Lagrangian tracking of the droplets, in which additional source terms from dispersed fluid are computed to be used in later transport equation of the Eulerian fields, was adopted. These source terms represent mass and momentum exchange between gas and liquid phase. The simulations were carried on to solve the set of obtained partial differential equations, for both gas and liquid phases, applying the merged PISO- SIMPLE algorithm and low Mach number formulation.

The hybrid filtered Eulerian stochastic field (ESF) showed a higher accuracy for turbulent reacting flow as well as for the entropy generation source terms for both single and multiphase reacting flows. Extending the analysis from single phase flow to multiphase flow increases the computational resources requirement which explain the need of the Lichtenberg High Performance Computer in case of involving more processes related to the droplet’s behaviour in other configurations.