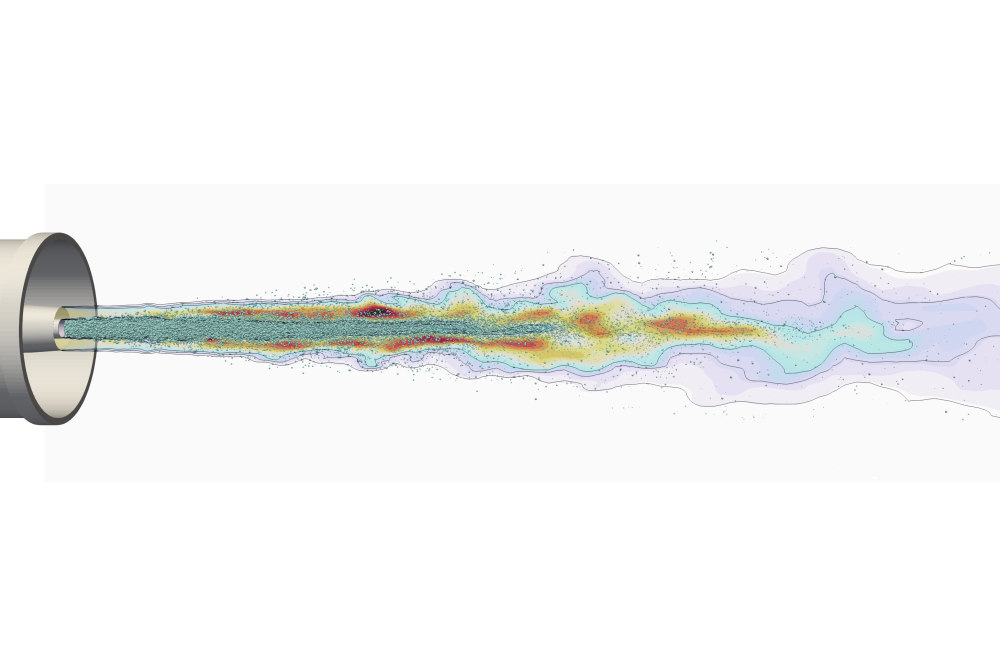 Dreßler, Louis_Assessment of the spray, chemistry and turbulence coupling and its modeling in numerical simulations of reactive multiphase flows_figure2

From a practical standpoint, the combustion of liquids includes multiple interwoven processes, such as the gradual breakup of large liquid structures into small droplets, the dispersion and evaporation of these droplets, the mixture formation and the subsequent combustion process. With respect to technical applications, all of these processes generally occur under the influence of turbulence, a chaotic, strongly unsteady process, which involves a broad spectrum of time and length scales. The better understanding of these processes is crucial to reach the goals mentioned above. Numerical simulations, beside experimental investigations, play a key role in improving this understanding. The large eddy simulation (LES) approach is used and further developed to investigate turbulent spray combustion systems while consistently considering the turbulence-chemistry-droplets interaction processes. The LES approach was combined with a tabulated chemistry approach to represent the detailed kinetics of the combustion reaction. Even though the computational costs that LES entails have become more and more feasible in the last decades, the present computations and adopted strategies are still far away from being performed on serial machines. In order to enable scientific insight within reasonable time, the usage of high performance computing to perform massively parallelized computation was required.

All simulations were performed using the open-source C++ library OpenFOAM version 16.12. In this context, a merged PISO- SIMPLE algorithm is applied to iteratively solve the set of partial differential equations. A low Mach-number approach is employed, suitable for flows under incompressible conditions and variable physical properties. Two different strategies were combined with a chemistry-tabulation approach for the turbulence-chemistry-interaction, the so-called artificially thickened flame (ATF) approach, and the Eulerian stochastic field (ESF) method. In the case of a two-phase flow, the only difference is the Lagrangian tracking of the liquid phase, where additional source terms due to the presence of a liquid phase are computed for usage in later transport equation of the Eulerian fields. These represent mass and momentum exchange between gas and liquid phase.

With respect to ATF, two novel approaches to represent the interaction of droplets with a thickened flame were proposed and evaluated [2]. By taking into account the relative orientation of flame front and droplet movement using the novel projection correction method, the overall consistency of the modeling framework was improved.Additionally, a novel modeling framework to compute turbulent spray combustion based on the Eulerian Stochastic Fields method was proposed and applied to a
turbulent spray flame. Its predictive capability was demonstrated and the results were used to characterize the evolution of the subgrid contributions at a representative position [1].

The computations performed on the Lichtenberg High Performance Computer are a step towards predictive simulations of turbulent spray combustion. It remains to be shown how the developed frameworks perform for other configurations.