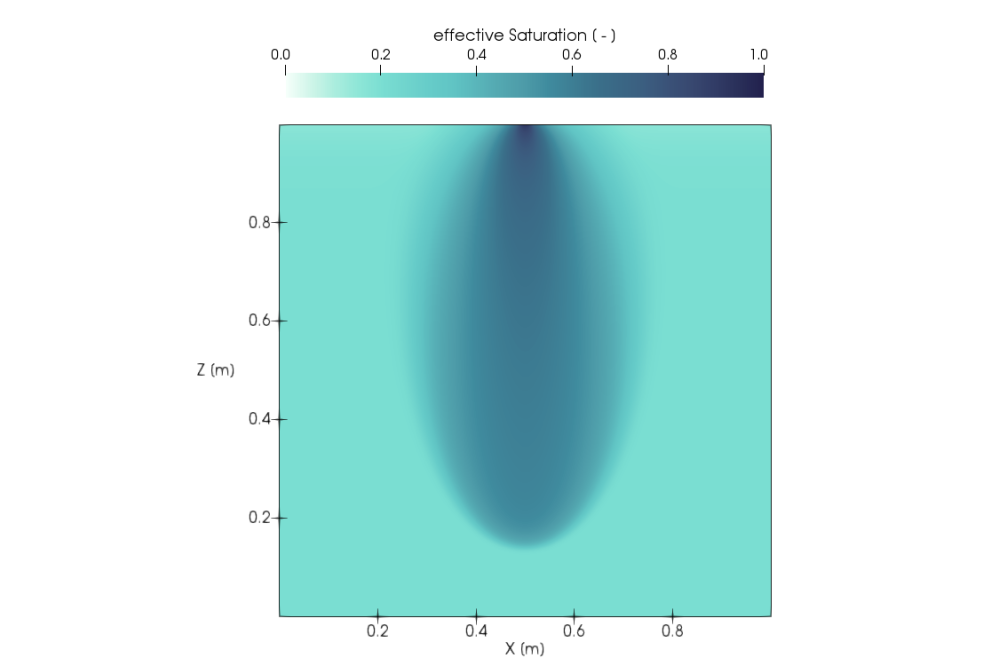 The assessment of the state of continental ice sheets has become a major issue in recent years and decades. These systems show like no other the serious effects of a global temperature increase. Together, the Greenland and Antarctic ice sheets store a volume of water equivalent to a 70 m sea-level-rise. However, the rate at which ice sheets contribute to sea-level-rise is subject to some uncertainty. To model the movement of meltwater inside the ice sheet and the firn layer, a material model for unsaturated porous media can be assembled. Central elements are the Richards equation, the water retention curve according to van Genuchten and the hydraulic conductivity according to Mualem. Since this model includes severe non-linearities and has to be solved on large scales in time and space, substantial computational ressources are necessary.

The software OpenFOAM was used to simulate the meltwater infiltration. OpenFOAM (Open-source Field Operation And Manipulation) bundles numerical solution algorithms for various physical systems and various utilities for the preparation and evaluation (pre- and postprocessing) of simulations. OpenFOAM is based on the idea of developing a program that is syntactically similar to mathematical expressions. The opensource approach of OpenFOAM allows users to develop further solvers or adapt them to their needs. This approach led to the development of RichardsFoam2, a solver for the material model of partially saturated porous media.

Several test cases were simulated to check the plausibility of the solver results. These proved that no errors occur in the mass balance of the system - a critical point in the numerical implementation of the material model. In addition, it was shown that RichardsFoam2 can model the transport of meltwater perpendicular to gravity, for example along hydraulic barriers. Furthermore, the properties of the porous medium (corresponding to the pore space structure) and the boundary conditions (flux or water pressure) were varied and their influence on percolation was described. Finally, various scenarios were implemented according to the natural conditions within the firn layer and the infiltration of meltwater into them was simulated.

On the basis of the simulations performed, the feasibility of modeling the infiltration of meltwater into the porous firnlayer is demonstrated. The model can deal with very dry initial conditions and the arising immense nonlinearities. It responds properly to hydraulic barriers and is capable of modelling infiltration in full 3D. Still some limitations remain. So far, infiltration in dry pore space can only be simulated approximately and is not designed for drainage (only infiltration). Furthermore, the simulations are only successful as long as the size of the simulated time steps is within a certain range and the mesh of the system is uniform. For larger problems and longer periods of time, it is therefore advisable to carry out the calculations on high-performance computers.

For future research, this work shows a way to incorporate firnhydrological processes into ice sheet models and improve their predictive accuracy with respect to sea level rise.