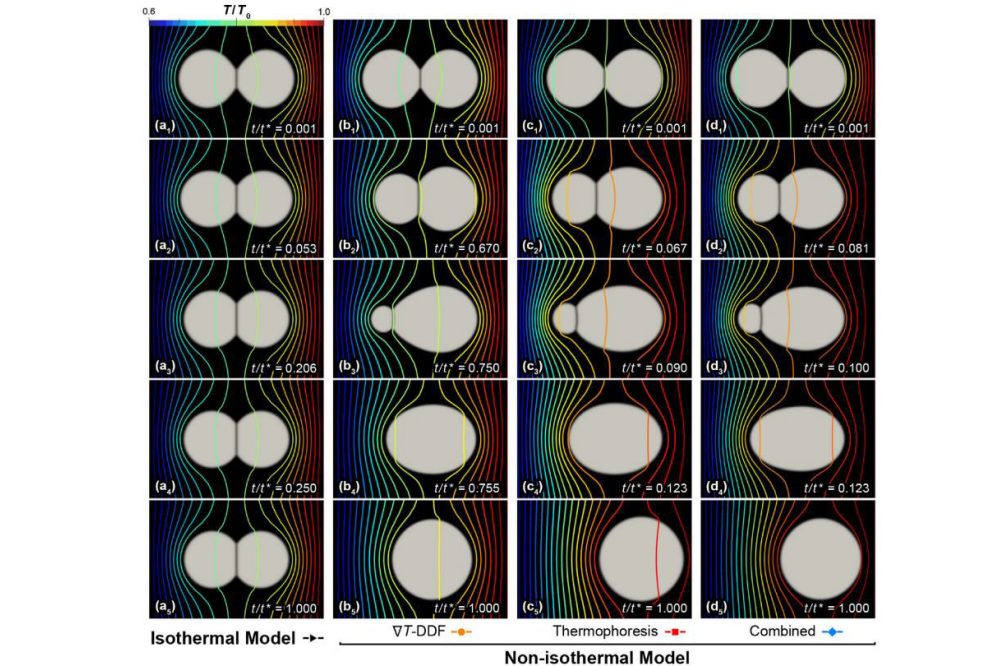 Figure 1: Coalescence benchmarks between two identical YSZ microparticles of 20 μm in diameter under a given domainal ∇ T of 10 K/μm with distinct models: (a1) – (a5) the isothermal model, and the nonisothermal models with (b1) – (b5) only ∇ T–DDF effect, (c1) – (c5) only thermophoresis effect and (d1) – (d5) combined both ∇ T–DDF and thermophoresis. The dimensionless end time for 2D simulations is t*=4x104. 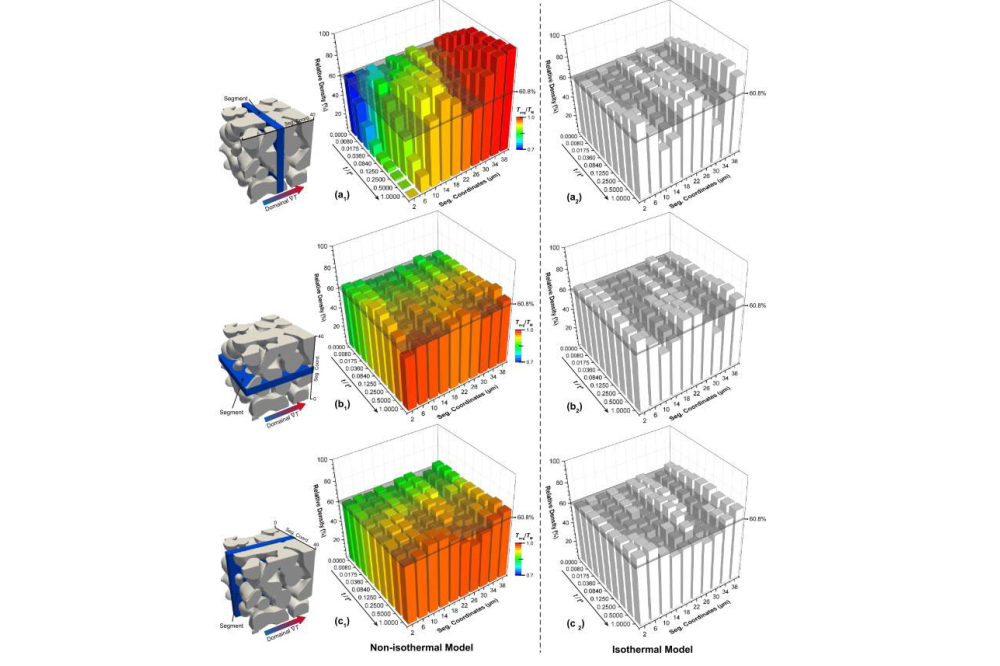 Figure 2: Spatial-temporal relative density of different segments along directions (a) parallel to domain ∇ T; (b), (c) perpendicular to domain ∇ T. (a1) – (c1) from transient microstructures of non-isothermal model and (a2) – (c2)from ones of isothermal model, with the color denoting the average temperature of corresponding segment.

Employment of treatments other than heat or pressure control distinguishes the unconventional sintering from the conventional one. Such techniques include but not limited to the field assistant sintering technology (FAST), incl. spark plasma sintering (SPS), microwave sintering (MS), flash sintering (FS) and selective laser sintering (SLS). In the recent decade, unconventional sintering gains interest for their extraordinary features, such as high efficiency, rapid heating/cooling rate, and feasibility for fast and shapecontrolled production. One of the characteristics of techniques such as SLS and FAST is that the high in-process temperature gradient (∇ T) can be expected. However, there are still debates about the constitutive mechanism of ∇ T on sintering. Due to difficulties in tracing the transient microstructure, previous researches involve analytical geometries which are highly idealized. As a promising alternative, phase-field modeling and simulation apply spatialtemporal order parameters (OP) to represent microstructure and its evolution with no need for interface tracking. It has been extensively studied for conventional sintering in recent decades. However, these models were derived under the isothermal condition. In this work, we develop a non-isothermal phase-field model, revealing temperature-dependent and ∇ T-dependent mechanisms, and further used to investigate the ∇ T-driven effects during unconventional sintering of yttria-stabilized zirconia (YSZ) in a thermodynamically consistent way.

The model is constructed from the entropy level, explicitly considering the contributions from thermal, configurational and gradient terms. We then obtain a free energy density functional with temperature-dependent heat, local and gradient terms through Legendre transformation. Such formulation is able to reproduce the temperature-induced inhomogeneity of surface and grain-boundary energies, and also reveal that local ∇ T can induce inhomogeneity in surface tension causing causing additional driving force for substance migration (∇ T -DDF). In addition to the mentioned one in substance transportation, it is also revealed that ∇ T acts as an extra driving force in grain boundary migrations. Apart from this, after thermodynamics analysis, we obtain simultaneously a heat transfer equation coupled with microstructure evolution, and modified kinetics for order parameters, including the mass transfer and grain growth under the non-isothermal conditions. A scenario with a conserved order parameter as well as a series of non-conserved ones is utilized to represent the microstructure evolution during AM. The model is numerically implemented by finite element method (FEM) within the program “NIsoS” developed by authors based on MOOSE framework.

In this work, we reveal the ∇ T-driven effects during unconventional sintering, incl. thermophoresis, ∇ T -DDF and ∇ T -driven grain boundary migration, and investigate their influences to the microstructure evolution via 2D and 3D non-isothermal phase-field simulations. Conclusions are briefly summarized in the following

In our work here, the model revealed that the heat transfer receives influences from microstructure evolution through transient terms of OPs. Kinetics of OPs simultaneously receive influences from local temperature variation through temperature-dependent local and gradient term as well. This allowed consideration of the non-isothermal kinetics related to the local temperature gradient, e.g. the Soret (thermophoresis) effect, which presents the diffusion directly driven by the local temperature gradient other than chemical potential in conventional Fick’s type diffusion. Implementation of the non-isothermal free energy density functional also allowed us to reveal not only the Marangoni (thermocapillary) effect, but also reveal the likely effects of temperature-gradient on grain boundary migration. We then compared the spatial-temporal distribution of isothermal sintering, in which the curvature-driven effects (incl. Ficktian diffusion and GB migration) are solely featured, to non-isothermal sintering. Results clearly present the phenomenon that substance gradually drift from cold to hot end of the domain. Also, as sintering goes on, local curvature and total surface area decrease resulting in the reduction of local ∇ μ. Meanwhile, local ∇ T becomes less concentrated along with the geometry evolution and gradually heat-up of the substance. In consequence, the possibly- existent domain shrinks. The amount of substance flux (driven by ∇ T) dominant sites also significantly decreases, showing the reduction of the thermophoresis effect.