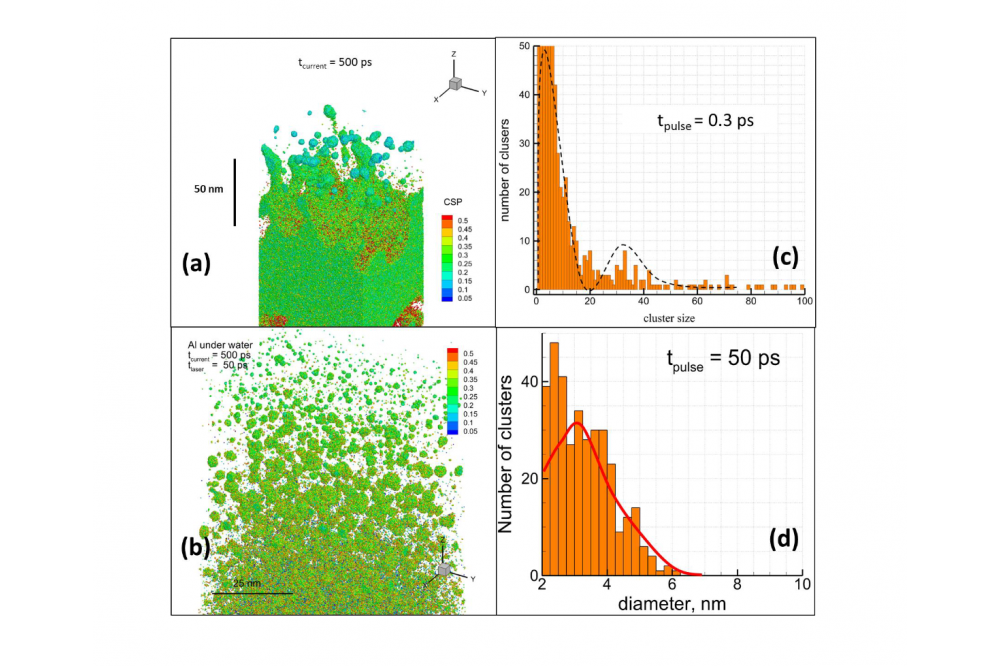 Fig. 1: The result of modeling of NPs formation process due to PLAL is shown for the case of 0.3ps (a) and 50ps (b) pulses as the atomic configurations taken at the time of 500ps after the beginning of the pulse. The atoms are colored by Central Symmetry Parameter (CSP) for identification of their local structure: solid < 0.08 < defects < 0.12 < liquid < 0.25 < surface < 0.50 < vapor. The water atoms are not shown for a better visual analysis of the forming NPs. The NPs size distribution for the case of short and long laser pulses are shown in correspondingly (c) and (d). 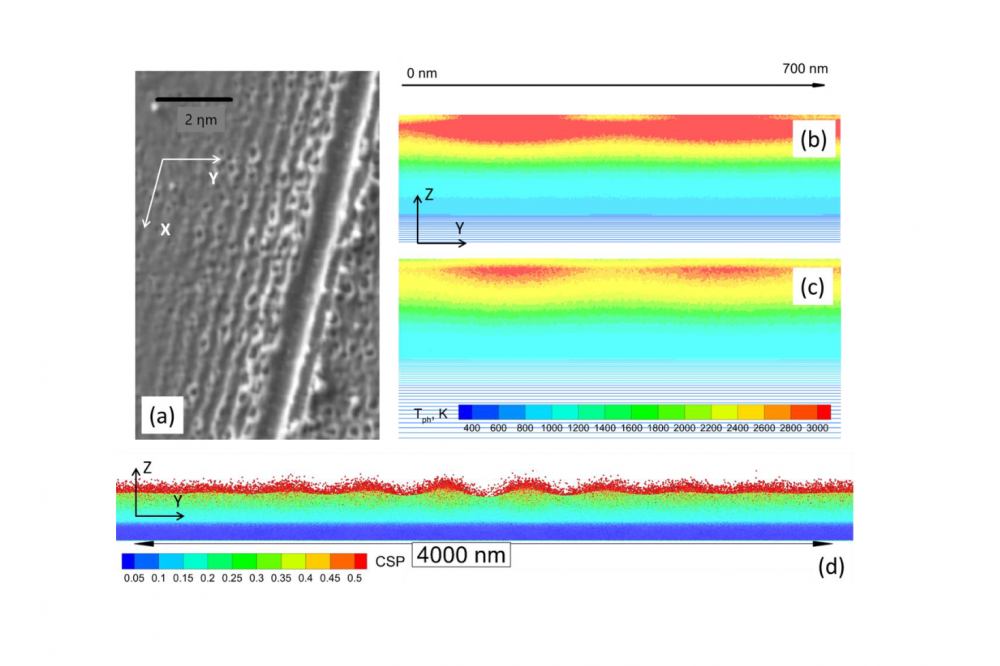 Fig. 2: The experimental SEM image of the resulting LIPSS obtained on Au gold surface due to interaction of a single 250 fs laser pulse at the incident fluence of 200 mJ/cm2 (a). Theoretically obtained temperature field distribution inside the Au target of the same experiment with inclusion (b) and discarded (c) ballistic transport. Atomic configuration from the same simulation at t =100ps after the pulse (d). The atoms are colored by Central Symmetry Parameter (CSP) for identification of their local structure: solid < 0.08 < defects < 0.12 < liquid < 0.25 < surface < 0.50 < vapor.

The mechanisms of laser-matter interaction are of great importance for many applications including the development of promising ultrafast nanophotonic devices and Industrial production of Nanoparticles (NPs) of specific properties, demanded in biomedicine (biosensing and targeted delivery). In the former case, the Laser Induced Periodic Surface Structures (LIPSS) could be produced by prestructured beams or excitation of surface plasmon-polariton (SPP) waves, i.e. surface plasmons coupled to an incident laser pulse. In the latter one, the particles of specific size, size distribution, morphological, optical and magnetic properties can be potentially obtained during the Pulsed Laser Ablation in Liquids (PLAL). The laser-generated NPs due to PLAL in colloidal liquids are stable and have a smooth (ligandless) surface, which also opens up prospects for their various applications in energy, catalysis and healthcare.

However, due to the complexity of the competing and interrelated processes involved into both the mechanism of LIPSS formation and the mechanism of NP generation in liquids, the final properties of the obtained elements are difficult to predict. In order to understand and to advance in technological utilization of both the LIPSS formation, and generation of NPs due to PLALin this project we apply the Molecular Dynamics (MD) based model in order to simulate the process of SPP generation and the formation of NPsin liquid media. For that purpose we modify the already exciting atomistic-continuum numerical approach, which we have successfully used in our previous projects on the periodic nanostructuring of metal surfaces with prestructured laser beam and generation of nanoparticles in different ambient. Then, the laser-induced processes are analyzed, linked to the resulting features, and the conclusion about possibility of manipulation with the obtained LIPSSand NPs properties via the laser irradiation parameters are drawn.

All numerical simulations were performed on Lichtenberg Super Computer Facility TU Darmstadt with the help of the combined atomistic-continuum model. The model is capable of addressing the kinetics of laser-induced phase transition processes at atomic level with Molecular Dynamics (MD) approach, whereas the effect of free carriers in metals (laser light2absorption, fast electron heat conduction, and the laser-induced electron-phonon non-equilibrium) is described via Two Temperature model (TTM) in continuum.

The results of the simulation on NPs generation due to short and long laser pulses due to PLAL can be seen in Figure 1, where the snapshots of the atomic configurations (the water atoms are blanked) are shown for both pulses, Fig. 1 (a) and (b). The corresponding NPs size distribution is shown in Fig. 1 (c) and (d). It can be seen that the same fluence, but different pulse duration gives a bimodal size distribution for the shorter pulse and a smaller mean size of unimodal size distribution for the longer one. This indicates that mechanisms of the material ejection due to spallation mechanismis suppressed for the case of longer pulse. It was also shown that for the longer pulse decreasing the incident fluence allows getting rid of the smaller fraction of the NPs and the larger fraction gives the larger mean size.