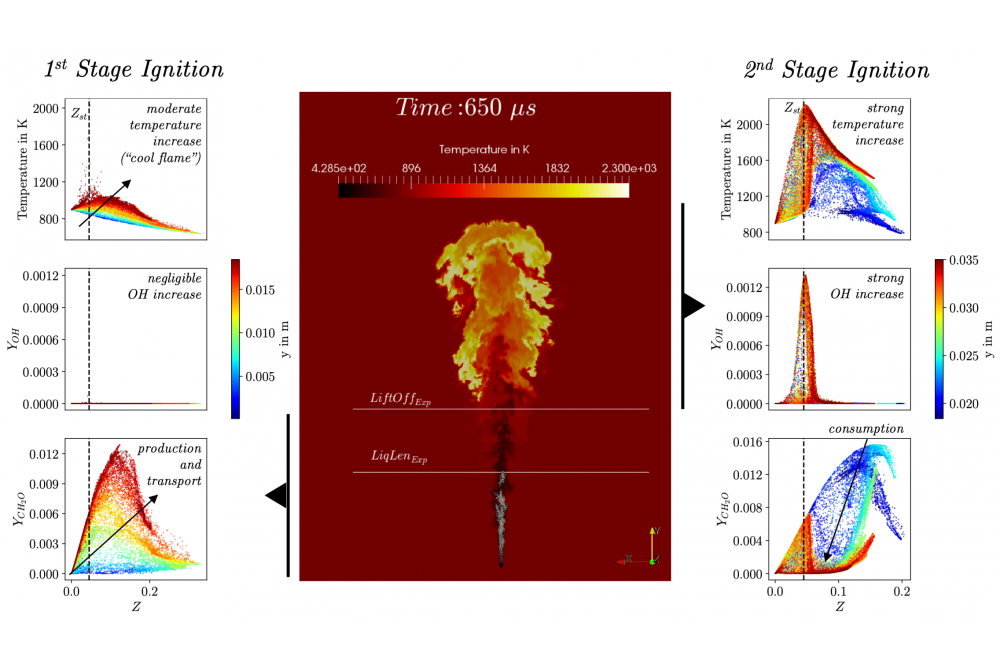 Instantaneous snapshot of the temperature distribution (center) of a spray flame in high pressure/high temperature conditions originating from the ECN Spray A injector with scatter plots extracted from distinct regions where mainly the first stage (left) and the second stage (right) of the ignition process is taking place (separated by the experimentally determined lift-off length LiftOffExp).

The formation of pollutants in direct injection engines is a field of research with high practical impact. Against this background, this project deals with the simulation of high-pressure spray injection and the subsequent ignition and pollutant formation, i.e. soot and NOx. Since these processes are strongly determined by the mixing processes of the evaporated liquid fuel with the gaseous environment, Large Eddy Simulations of the turbulent flow developing during the injection process are performed. The results of these detailed simulations are used to analyze the cause-effect chain in pollutant formation in high-pressure spray flames and serve as reference data for the adaption of models with lower computational cost but higher amount of empirical model parameters.

The dispersed liquid phase arising from disintegration of liquid fuel near the nozzle is described by a statistical representation in terms of a number density function. This is discretized by stochastic particles in the current investigation, i.e. parcels representing a certain number of droplets with equal quantities. The underlying continuous gas-phase is described by the conservation equations for mass, momentum and enthalpy in an Eulerian frame of reference which are discretized by means of the Finite Volume Method. Coupling between both phases is obtained by source terms, incorporating non-resolved exchange processes like drag, heat- and mass transfer. The ignition and combustion process remain unresolved at its smallest scales. Since combustion chemistry is fast and takes place in thin flame-sheets in the current application, equations for the flame structures can be solved decoupled from the 3D-CFD within an in-house C++ code and its solutions are assembled within a look-up table for read-into the CFD by parametrizing the flame structure by a reduced set of control variables.

In the current project phase, the ECN Spray A injector was investigated by means of Large Eddy Simulation for the non-reactive as well as reactive environment. Experimental measurements in terms of vapor and liquid penetration lengths are well reproduced with the simulation strategy obtained by a parametric study performed during this phase of the project. Furthermore, the known physical mechanism of ignition and flame evolution were able to be reproduced.

Due to their molecular structure, the ignition of long-chained hydrocarbon fuels is taking place in at least two stages. After the production of first radicals from the fuel molecules, formaldehyde (CH2O) is formed in fuel lean regions under most reactive conditions which is connected with a moderate increase in temperature. By means of molecular and turbulent transport, this temperature rise leads to a heat flux to adjacent fuel/air mixtures, initiating the onset of ignition there. This process is called cool flame propagation as introduced by Dahms et al. 2017.

After sufficiently large residence times, the second stage of the ignition process is taking place where CH2O is consumed connected with a strong increase in temperature and OH mass fraction for mixtures near stoichiometric conditions. These processes are shown on an instantaneous snapshot of the spray flame under high-pressure/high temperature conditions originating from the ECN Spray A injector.

Since both, the ignition and the delivering of vaporized fuel during injection are transient processes, they are both determining the spray flame ignition delay time and the transient evolution of the flame lift-off length until a statistically steady state is reached at the location of the lift-off length. However, the flame head is still evolving at the time instant shown in the figure below, leading to a further evolution of the second stage of ignition in the fuel lean part of the flame. On even larger residence times, pollutants like thermal NO and soot precursor will build up. Their analysis is planned for the next stage of this project.