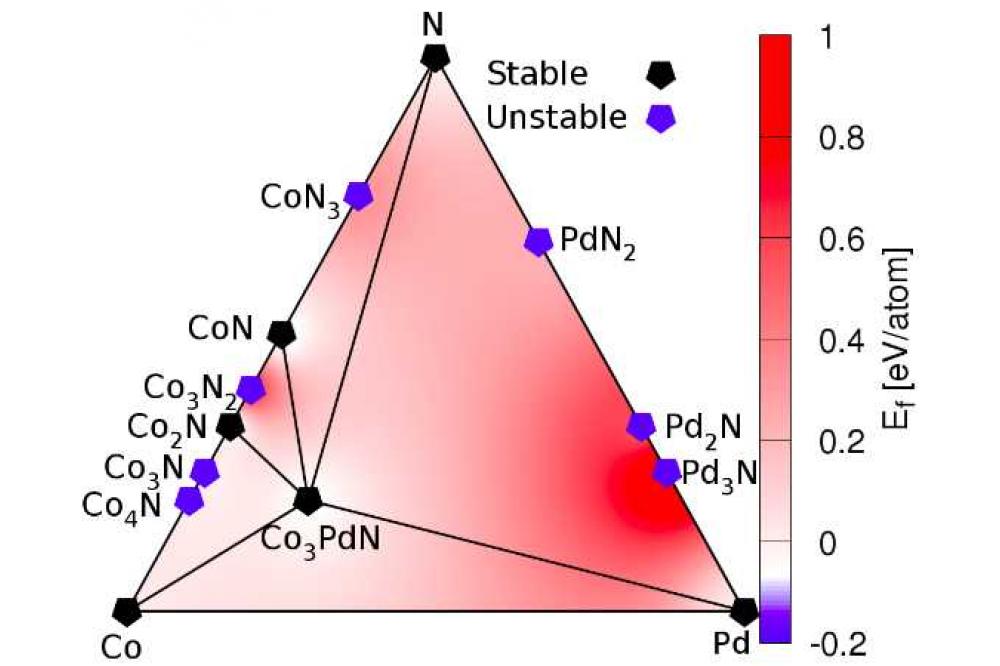 Analogous to perovskites, the antiperovskites (APVs) are  also one of the most commonly explored materials in  recent years because of their remarkable properties such  as superconductivity, nontrivial topological nature, spin  glass behavior, barocaloric effect, thermoelectric, magnetostriction, negative thermal expansion, and  piezomagnetism.[1-8] Particularly, magnetic APVs with  transition-metal show many fascinating physical properties, resulting from the cooperative interplay among the lattice, spin, and charge degrees of freedom. A prominent example is the barocaloric effect observed in Mn3GaN,[4]  which is originated from the geometric frustration  associated with the noncollinear antiferromagnetic spin  configuration.

An extended version of the high-throughput environment  (HTE) is used to determine the thermodynamical  and mechanical stability. DFT calculations are performed  with the projector augmented wave method as implemented in the VASP package. The energy cutoff is 500 eV, and 14 × 14 × 14 k-points are used for the Brillouin zone integrations. The exchange-correlation functional is  approximated using the generalized gradient approximation (GGA) as parametrized by Perdew−Burke−Ernzerhof (PBE). The lattice dynamics of APVs is studied in the framework of the harmonic approximation, where the phonon spectra are obtained using the frozen phonon approach with the Phonopy and VASP codes.

We carried out systematic high throughput screening on 620 antiperovskite (APV) compounds using first-principles calculations. Three stability criteria such as such as thermodynamical stability, mechanical stability, and lattice dynamic stability were evaluated. After validating our calculations using 79 existing APV materials, it is identified that 11 novel compounds can be stabilized in the cubic APV structure. This paves the way to design more magnetic materials, and we hope our work will stimulate more experimental andtheoretical efforts to investigate interesting properties of APV compounds. Particularly, in order to consider all competing phases, the concept of the convex hull is used. The convex hull is constructed by linear interpolation of the formation energies of known phases of a system in order to calculate the formation energy for every composition. For magnetic APVs, all competing phases stored in our in-house HTE database are considered. It contains among others about 3900 different experimentally reported binary and ternary phases relevant for the calculation of ternary phase diagrams with the magnetic 3d elements M= Cr, Mn, Fe, Co and Ni. In addition, about 5,200 phases available in the materials project database for these systems are included. Such calculations enable us to construct ternary phase diagrams, as shown in Fig. 1 for the Co-Pd-N system where the Co3PdN is a stable predicted phase. In combination with phonon spectra, the Gibbs free energy at finite temperatures can be evaluated, which can provide essential inputs for future thermodynamic assessment of the ternary phase diagrams using CALPHAD to predict novel phases.