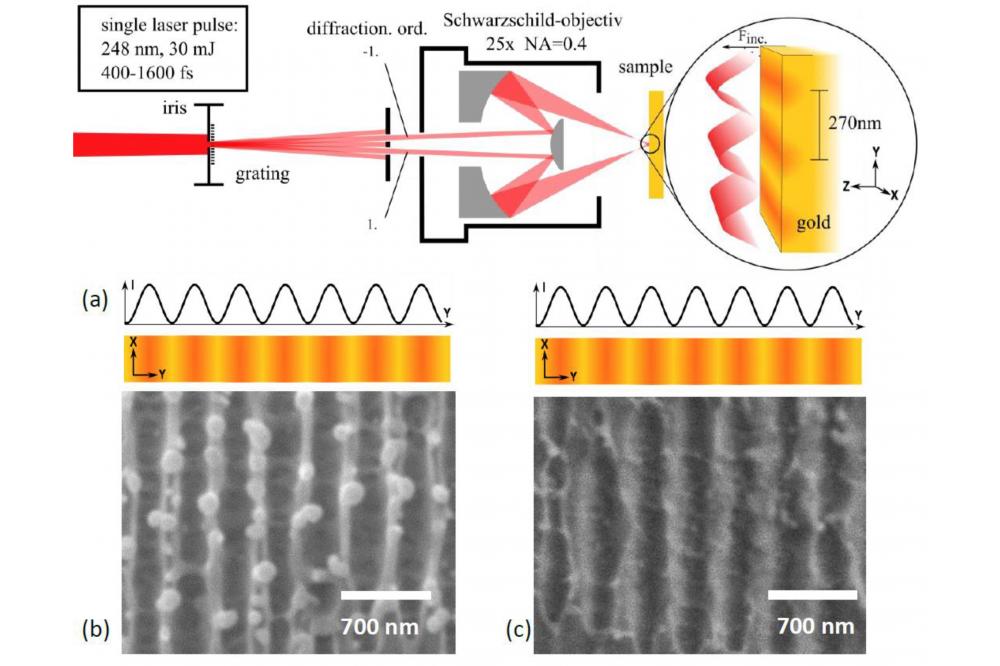 Figure 1: The experimental setup for UV periodic nanostructuring of metals is schematically represented in (a). The SEM images of surfaces of gold target structured with the setup shown above in air (b) and in water (c) at the same incident fluence of 500 mJ/cm2. The intensity distribution across the target surface is schematically imposed directly atop the experimental picture [1]. 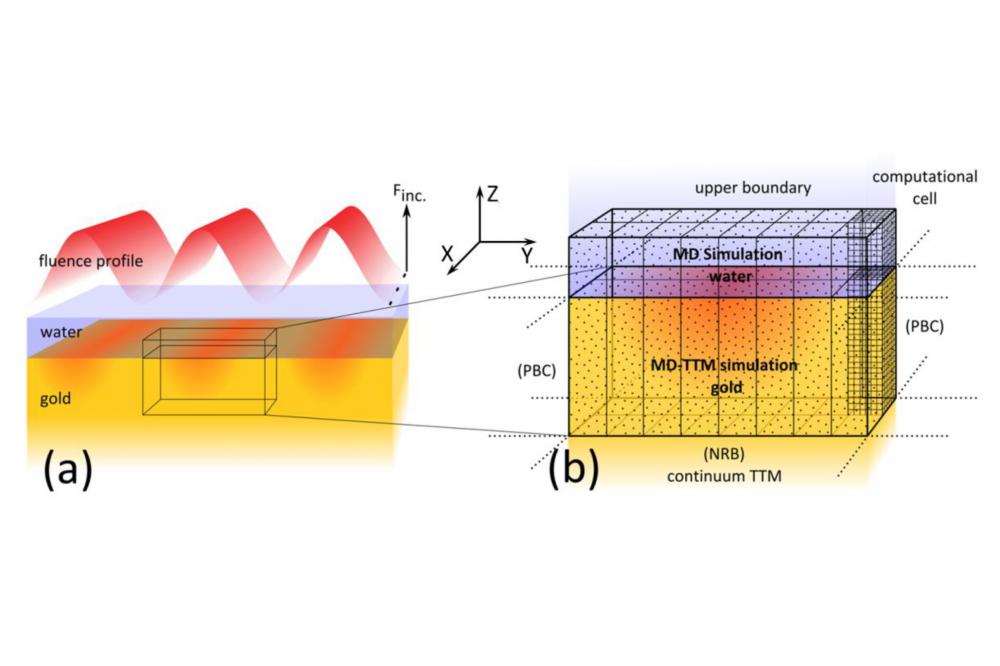 Figure 2: Computational box for the experiment, shown in Fig. 1 (b) and (c), relays on the sinusoidal laser energy distribution on the target surface (a). The  total computational cell therefore is schematically represented for multiprocessing mode in (b). In each particular processor core an atomistic-continuum MD-TTM model for metal part and ordinary MD model for water part are solved in 3D space (internal mesh is shown for one processor core). Beneath the non-reflective boundaries (NRB) an ordinary TTM model is solved in continuum to account on the heat flux outward the metal surface region describing the cooling process [10]. 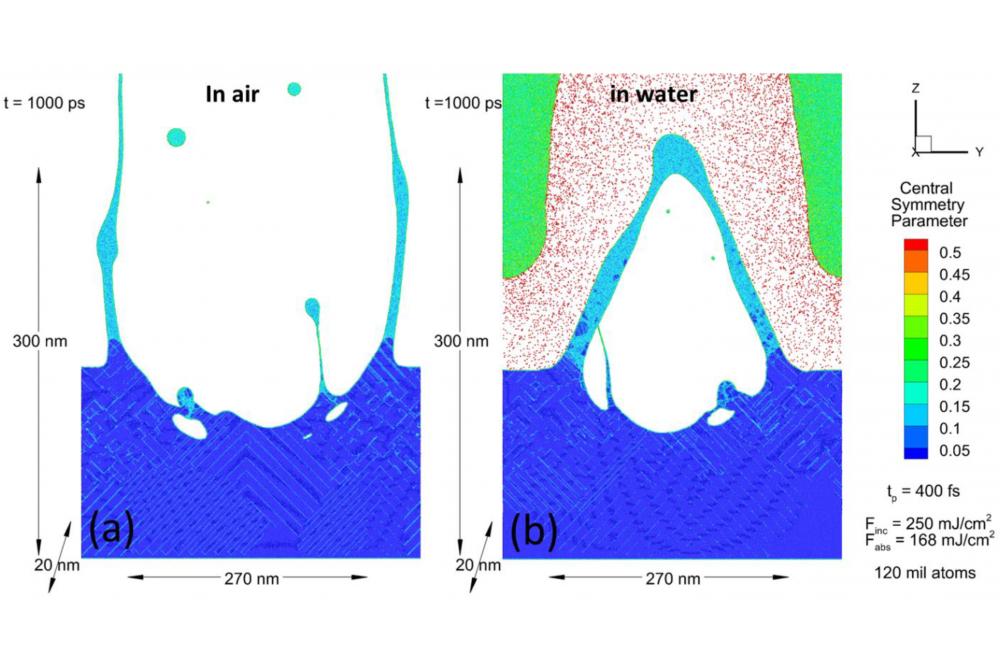 Figure 3. The final atomic snapshots of the structured gold surface due to 400 fs laser pulse with 270 nm period intensity distribution along Y axis taken at t = 1000 ps The same incident fluence of 250 mJ/cm2 gives qualitatively different result for the case of structuring in air/vacuum (a) and under water layer (b) [10].

This work is a successor of our previous study [1], were the mechanism of periodic nanostructuring process due to UV (248 nm) single laser pulses (with a periodic sinusoidal-shaped spatial intensity profile on the surface of a thick Au target) was studied both experimentally and theoretically. In the present study we focus on the new phenomena (as compared to those studied in [1]) involved into the process of periodic nanostructuring under water layer. For this purpose we perform several simulations at the incident fluences ranged 160 to 250 mJ/cm² and the nanostructuring process itself will be studied with and without spatial confinement due to a layer of water situated atop the target. The experiments on nanostructuring performed in the presence of water layer on the surface revealed, in general, finer structures, less damage of the surrounding parts, and cleaner surface as that compared to the experiments performed in air or in vacuum [2,3,4], Figure 1. The physical mechanism underlying the advantage of nanostructuring process under a layer of water, however, is not yet clear, and essential phenomena resulting in a better quality of the structured surface obtained under conditions of spatial confinement become a main subject of this work.

From the point of theoretical study, the modeling of water is a challenging task due to specific properties of the water molecule. The existing water models [5,6,7], although nicely representing the water properties for particular experiments, suffer from one or another limitations depending on the assigned task details. The explicit model [5] requires very shallow computational time-step during the integration, which results in its high computational cost. The model reported in [6] is representing a water molecule as three particles, which is necessary for some simulations, but requires simulating quite a number of atoms, which limits the size of the total computational box. The model suggested in [7] represents the water via big (several  molecules) interacting particles that results in an accurate reproduction of the water properties, but the interaction between big water particles and small metal atoms does not seem to be obvious.
In this work we suggest a water model representing its mechanical properties only, which helps us to overcome the time-step and system size limitations on one hand, but still allows for a direct interaction between water and metal particles as the interaction between single molecules. To simulate the process of nanostructuring of metals under water layer, this model, therefore, is used in combination with already developed MD-TTM computational approach [8], suitable for simulation of ultrashort laser pulse interaction with metals [8]. The computational box for all the simulations is schematically illustrated in Figure 2. Thus, the surface nanostructuring simulations in this work are performed in air/vacuum and under a water layer for three different incident fluencies. Both experiments and simulations are executed with a spatially modulated intensity profile with a period of 270 nm and 350 nm, respectively. The spatial irradiation geometry of the experiment combined with a properly selected model volume gives the opportunity to obtain a direct comparison of experiment and simulation of nanostructuring a thick Au target on the experimental scale, which eventually opens the way to predict properties of surface modifications for industrial applications.

The results of simulations of nanostructuring process in air/vacuum and under spatial confinement due to a water layer at the incident fluence of 250 mJ/cm2 are presented in Figure 3. By means of a direct comparison of the resulting snapshots we can visualize, analyze, and understand the effect of water confinement on the process of nanostructuring. First, the water confinement leads to a significant suppression of the growing nanofeature that makes the final structured surface smother as compare to that obtained in air or in vacuum. It is also visible that by the final time of 1000 ps, the effect of the water layer results in a significantly faster solidification of the growing tip of nanofeature. The high rate of cooling due to electron heat conduction (inside the nanofeature) and heat losses (water vaporization) facilitate the solidification process. Second, in Fig 3(a) a number of forming liquid metal droplets will eventually redeposit back on the resulting surface affecting its quality. In Fig 3(b), however, we do not observe this effect. The formation of liquid metal droplets at the applied fluencies is suppressed in the water layer and the resulting nanostructured surface therefore is cleaner (free of redeposited metal debris). This can be confirmed by examination and comparison of the experimental pictures presented in Fig. 1(b) and 1(c). And third, it was detected during the simulations, that for the case of nanostructuring under water confinement, the propagation of the dislocation planes inside the metal film is deeper and it proceeds in a greater number due to additional resistance of the water layer to the relaxation of the laser-induced stresses inside the metal film. As a result, the structures, obtained under regime of spatial confinement due to a water layer are expected to be stronger from the point of endurance, working similarly to the short pulse laser peening process [9]. The detailed description of this research can be found in Ref. [10].

Understanding these processes on an atomic scale and being able to precisely simulate them provides a powerful tool for predicting material behaviour and hence designing new nano-technology applications [11]. Furthermore the MD simulations suggest that the prepared surface with formed nanofeatures on it and nanovoids inside not only could serve in technological applications because of its unique properties but might have high endurance due to internal structure strengthened by dislocation planes. While from the results obtained it is evident that at higher fluences a removal (spallation/ablation) of the irradiated material will occur, the use of spatial confinement (water layer) above the material can result in even finer structures with their smooth distribution across the surface.