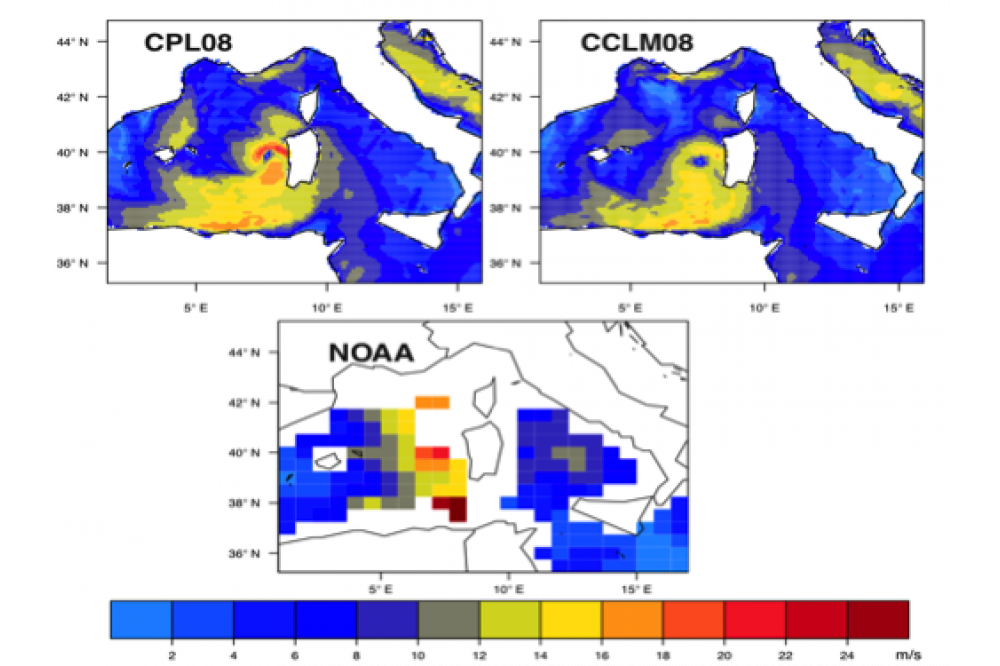 The climate system is an interactive system which contains different components such as the atmosphere, the hydrosphere (the oceans and river systems), different ice forms on the Earth’s surface, land surface and all ecosystems. In order to simulate the climate system, all of these components need to be taken into account.

Besides global climate models, regional climate models are used to describe the state of the atmosphere in a limited area on regional scale. In practice, the interactive feedback of the atmosphere and the ocean is often neglected. The necessary ocean surface is taken from an external data set, for example from a forcing global climate simulation or a sea surface data analysis. However, taking the atmosphere separately gives an incomplete picture of the real climate system because the link between the different climate system components is missing. The Mediterranean and Baltic Sea play an important role in the regional climate of Europe.

Therefore, our main areas of interest are the Mediterranean Sea with its diverse wind patterns in the atmosphere and deep convection in the ocean and the North- and Baltic Seas with the complex water exchange between them. The development of a regional coupled climate model is a logical step to understand the local interactions between atmosphere and ocean. The complex processes on the interface between atmosphere and ocean are realized with direct flux exchange in a high frequency so the models could react to changes in the other component immediately.

The atmospheric model COSMO/CLM is coupled with the ocean model NEMO_Nordic over the Baltic Sea. The first results show a cooling of the atmosphere over Central Europe of over 2°C and a warming over Scandinavia in winter. In summer, the atmosphere is warmer in the vicinity of the Mediterranean Sea. Compared to the uncoupled run, the coupled is colder especially in summer in eastern Europe.[2] For the Mediterranean Sea the atmospheric model COSMO/CLM is coupled with the ocean model NEMO_MED12. For example, so-called medicanes (Mediterranean hurricanes) can now be investigated in a coupled system with high atmospheric horizontal resolutions (e.g., 25 and 9 km). The results suggest that the coupled model is more proficient for systemic and detailed studies of historical medicane events, and that this model can be an effective tool for future projections.[1]