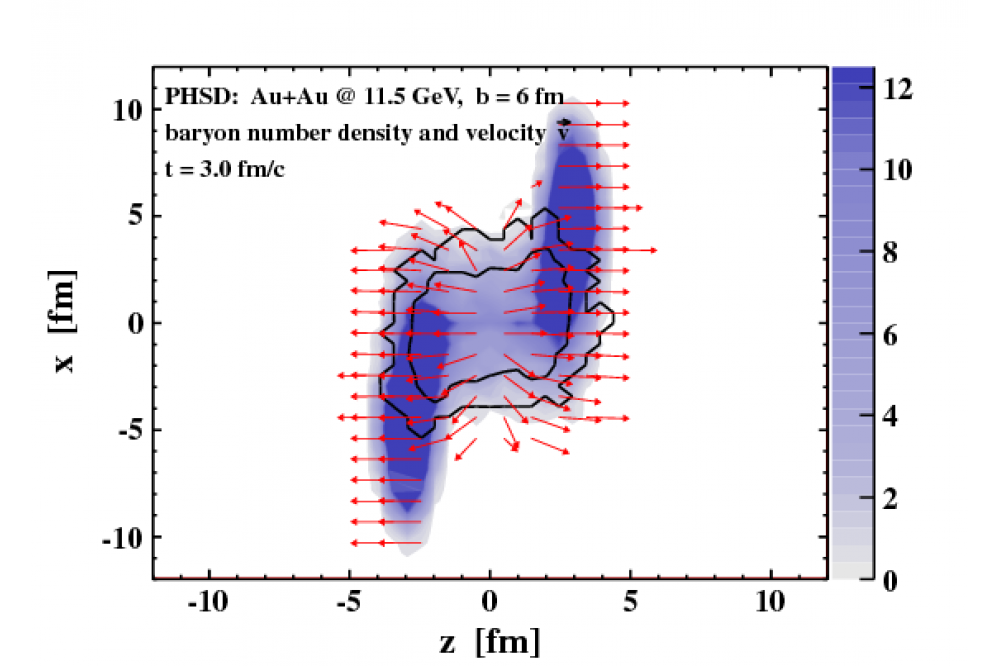 Figure: Snapshots of the baryon energy density distribution in the PHSD model at the time t = 3 and 6 fm/c for Au+Au collisions and collision energy 11.5 GeV. The energy density scale is given on the right side in GeV/fm3. The solid curves display parton density levels for 0.6 and 0.01 partons/fm3. The arrows show the local velocity of baryonic matter. 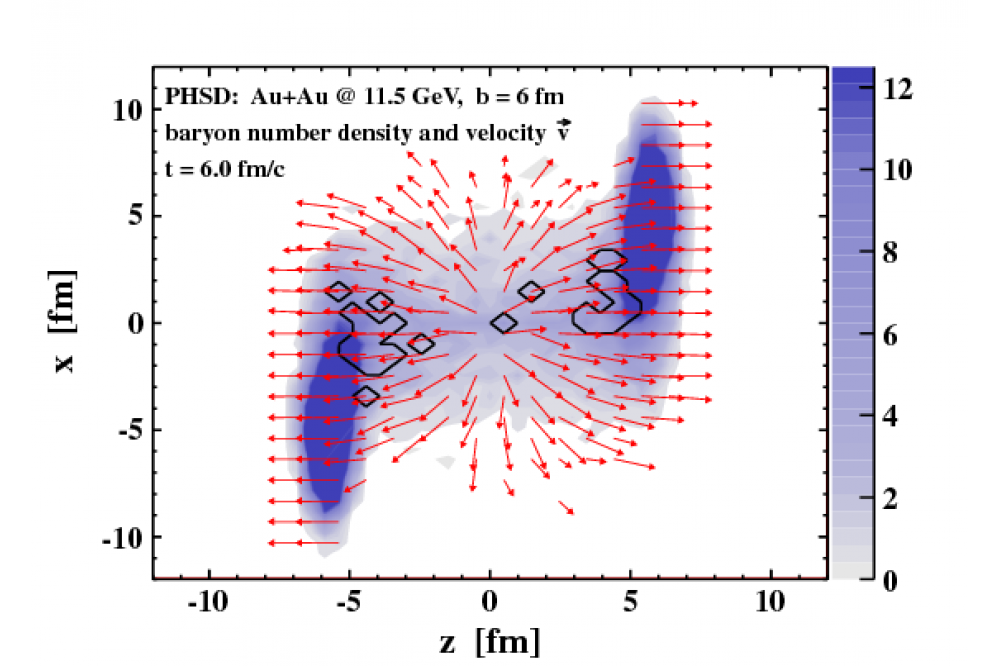 The Parton Hadron String Dynamics (PHSD) transport approach has been used to study the evolution of hadronic and partonic matter as well as their transition into each other in relativistic heavy-ion collisions. We found that partonic matter at midrapidity lives only during a few fm/c and then hadronizes into mesons and baryons during the expansion of colliding system and decreasing of energy density.

The PHSD model is a covariant dynamical approach for strongly interacting systems formulated on the basis of Kadanoff-Baym equations or off-shell transport equations in phase-space representation, respectively. The PHSD model includes the creation of massive quarks via hadronic string decay – above the critical energy density ~ 0.5 GeV/fm3 – and quark fusion forming a hadron in the hadronization process. With some caution, the latter process can be considered as a simulation of a crossover transition because the underlying EoS in PHSD is a crossover.

At energy densities close to the critical energy density the PHSD describes a coexistence of this quark-hadron mixture. This approach allows for a simple and transparent interpretation of lattice QCD results for thermodynamic quantities as well as correlators [1].

Two snapshots for non central Au+Au collisions along Funding source the z axis at the times t = 3 and 6 fm/c after first contact illustrate the evolution of energy density of baryons (color scale) and partons (two black levels for 0.6 and 0.01 partons/fm3). At the early times when the energy density is above the critical energy density ~ 0.5 GeV/ fm[3]  partonic matter is created (left) and when the colliding system expands (and its energy density decreases) partons hadronize into mesons and baryons already after 6 fm/c for Au+Au collisions at collision energy 11.5 GeV. The arrows on the figures show the local velocity of the baryonic matter.

For more details and also for the analysis of recent STAR data for the directed flow of protons, antiprotons, and charged pions obtained within the beam energy scan program we refer the reader to (Konchakovski et al.) [1] and references therein.