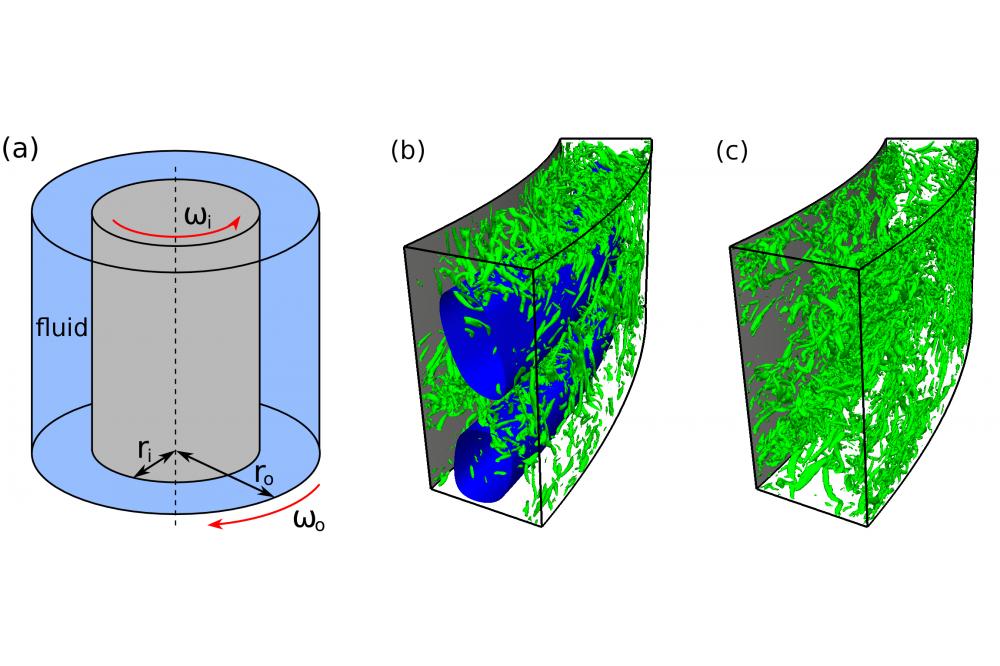 Fig. 1: (a) Taylor-Couette system with transparent outer cylinder and (b,c) snapshots of the flow for shear Reynolds number 20,000 showing only one-fifteenth of the full cylinder circumference for the cylinder radii 9 and 10. The high-drag state for co-rotating cylinders in (b) consists of a large vortex pair (blue tubes) that organizes the small-scale turbulent vortices (green) into horizontal bands between the large vortices. The second high-drag state for counter-rotating cylinders in (c) is caused by turbulent vortices (green) everywhere close to the cylinder walls.

Shear flows occur frequently in everyday life and arise whenever a fluid (gas or liquid) moves over a solid surface or when an object (e.g. boat, car) moves in a surrounding fluid. In both cases, the interaction of the fluid with the surface can create vortices that, finally, result in turbulence. When the fluid additionally rotates, the resulting extra forces can either enhance or weaken the turbulence and, consequently, change the drag force that the fluid exerts on the wall.

Using a spectral simulation method, we studied the turbulent motion and drag of a rotating shear flow in a fundamental model system: the flow between two independently rotating cylinders (Taylor-Couette flow, Fig. 1a). In this system, the rotation state of the fluid is determined by the average of both cylinder rotation rates while keeping the differential rotation of the cylinders constant.

Our simulations showed that a turbulent state of maximal drag exists for counter-rotating cylinders,[1,2] which is in agreement with earlier experimental observations. The occurrence of this maximum in the drag has been linked to the emergence of a stabilized region near the outer cylinder that switches over time between quiescent and turbulent phases.[3] This intermittent turbulence in the outer region disappears when the cylinder radii become very large so that the cylinder walls are almost planar. Our simulations demonstrated that in this limit the flow behavior as well as the influence of rotation on the turbulence become nearly independent of the cylinder radii.

In contrast to the results for small cylinders, two rotation states featuring a high drag exist for large cylinder radii. Our simulations revealed that one of these states is characterized by a strong large vortex pair (Fig. 1b). The other high-drag rotation state is related to strong turbulence directly at the walls (Fig. 1c).