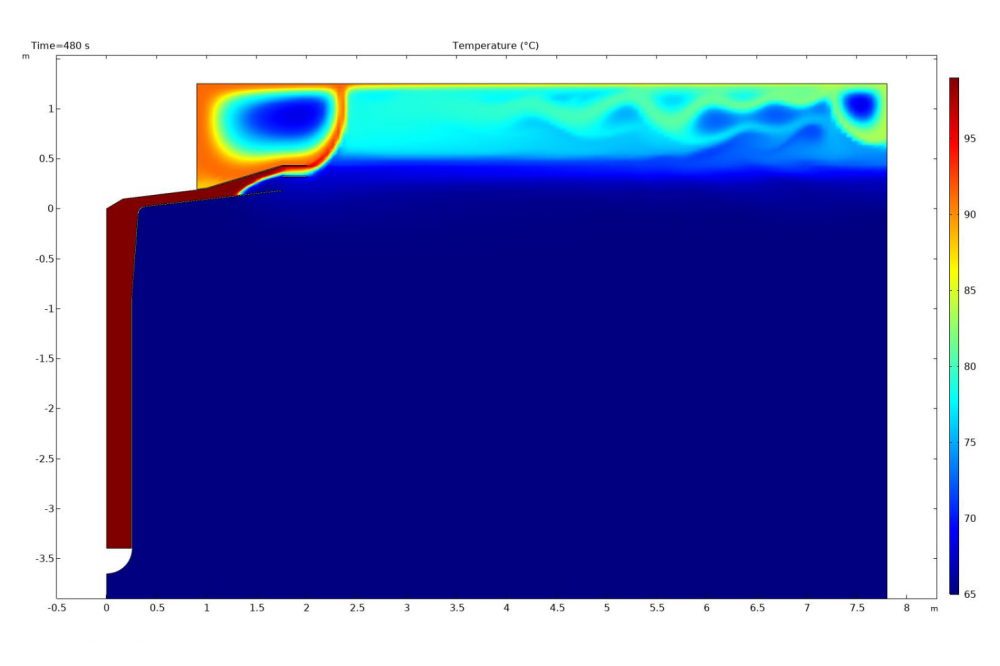 To combat climate change effectively, the use of renewable energy must increase. However, the supply of renewable energy fluctuates over time due to external factors. Energy storage systems enable the decoupling of the supply and demand side in regard to time and facilitate the switch over to renewable energy. Thermal energy storage (TES) systems are used for this purpose in district heating networks. In this project, the behaviour of large sensible TES systems is examined using the specific example of the TES constructed by ENTEGA AG at the waste incineration plant in Darmstadt. The project aims to improve the understanding through high resolution temperature measurements, which are used to build and evaluate a detailed CFD model of the TES. Later on, this detailed model will be used to improve simplified models, which can be used to simulate and design district heating networks.

For this project, the nonisothermal fluid flow in and out of the TES, as well as the behaviour during standby periods, is investigated using the FEM software COMSOL Multiphysics. As turbulent effects occur and significantly affect the behaviour of the TES due to the large size of the tank and the high velocities during (dis-)charging, a RANS model is used to account for these effects. Therefore, the TES is modelled three-dimensionally to capture the turbulent structures accurately. The combination of a large computational domain, long timeframes and three-dimensional turbulence effects results in computationally expensive simulations, which can only be achieved using an HPC. During this project period, the focus was on improving the stability of the models and managing artificial diffusion introduced by the CFD software.

During the first project year (2019/20), simple two-dimensional models were built and run to test basic assumptions. During this phase, unrealistically high thermal conduction, induced by small fluctuations in the velocity field, occurred. The second project year (2020/21) was spent searching for the cause and possible mitigation of this phenomenon. The switch from LB1 to LB2, as well as the switch from COMSOL Multiphysics 5.4 to 5.6, which both caused some compatibility issues, interrupted this work and caused some delays. First, productive simulations of the charging cycle and the standby phase were performed.

Unfortunately, few quantitatively valuable results have been produced yet. The simulation of a charging cycle matches data found in literature well, and first simple simulations of the standby phase match the expected performance well. In addition to the aforementioned numerical problems, delays in the TES’ construction meant that no experimental data is yet available. However, the TES has now been finished and experimental data is expected to be available soon. Recent validation efforts showed positive results, enabling the project to move forward with more productive simulations, which will be done over the next project period. This will include parameter studies on different design and operation parameters to examine their influence on the TES system’s performance.