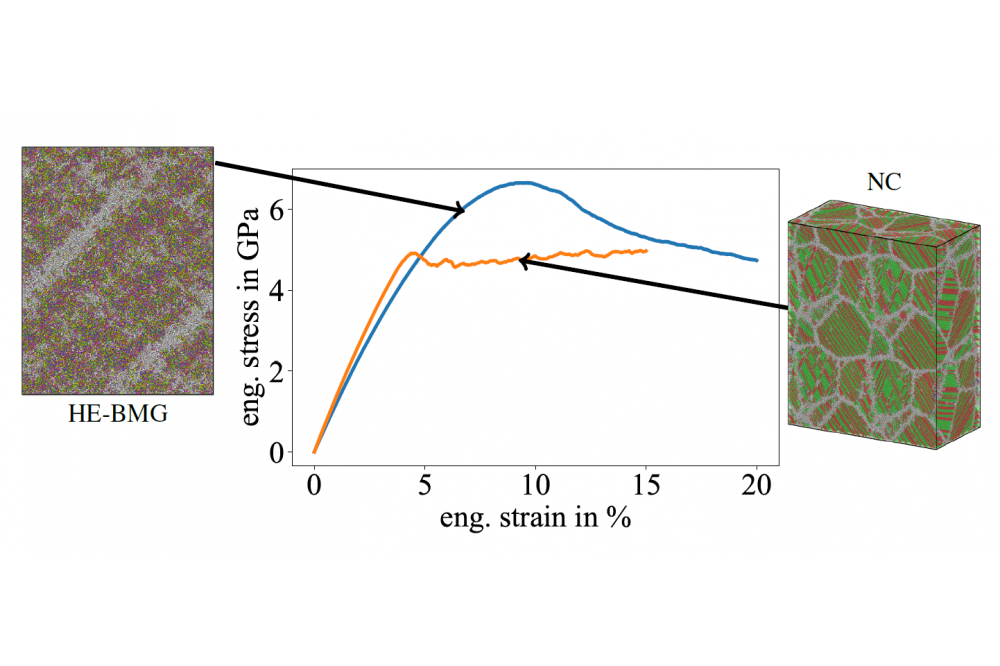 Figure 1:Stress-strain curves of 3d-periodic CrMnFeCoNi High Entropy Bulk Metallic Glass (HE-BMG) and nanocrystal (NC) subjected to tensile loading at 50 K and a strain rate of 10⁸s⁻¹ and their respective deformation structures. The maximum stress required to nucleate a shear band in the HE-BMG is higher than the yield strength for dislocation nucleation in the NC. While the compositions are equal and both materials show metallic bonding, the structures are entirely different. On one hand, the structure of the HE-BMG is amorphous. The atoms, which are part of the shear band are coloured white. The NC on the other hand shows long range order. The grain boundary atoms are coloured white. The atoms in the grain are coloured according to their crystalline structure. Due to the deformation dislocations are introduced into the grains and hcp and fcc stacking faults form, coloured in red and green, respectively.

We investigate the CrMnFeCoNi (Cantor alloy)[1] high-entropy bulk metallic glass (HE-BMG). HE-BMGs are a new amorphous materials class, that combines the high entropy alloys (HEAs) with the metallic glasses (MGs). HEAs on one hand consist of more than five elements at near equiatomic concentrations [2]. MGs on the other hand are amorphous metallic alloys that are rapidly quenched from the melt such that crystallization is kinetically hindered. They exhibit a high strength, hardness, and good corrosion resistance but are brittle at room temperature due to shear localization [3]. Preventing shear band formation and propagation in MGs is essential to prevent brittle failure. It has been shown that shear band propagation can be hindered by structural inhomogeneities [4] and we want to see whether the chemical fluctuations in the HE-BMG can further enhance its ductility.
The CrMnFeCoNi system has so far only been studied in its crystalline form [5, 6]. We aim to investigate its mechanical properties as HE-BMG using large scale molecular dynamics simulations using LAMMPS, serving as a guide for experiment. The classical second next neighbor modified embedded atom method (2NN MEAM) interatomic potential parameterized by Choi et al. [7] is used.
The CrMnFeCoNi HE-BMG samples are prepared using melt quenching and the effect of the cooling rate on the resulting glass structure is studied. Afterwards, we investigate whether the deformation behavior of the HE-BMG under compressive and tensile load is different compared to the conventional CuZr BMG and the crystalline CrMnFeCoNi alloy. Last, we will look at the deformation behaviour of a CrMnFeCoNi HE-BMG sample, that already contains a shear band, in order to see, whether the nucleation of a second shear band can be induced.

For all our simulations we used Molecular Dynamics implemented in the well-established, open source software package LAMMPS, a ’Large-scale Atomic/Molecular Massively Parallel Simulator’ from Sandia National Laboratories. LAMMPS supports all features required for our research.

Fully amorphous CrMnFeCoNi HE-BMGs were successfully produced by melt quenching with rates below 10K/s. In the cooling curves a phase transition could be detected and the glass transition temperatures showed a cooling rate dependence. The characterization indicated an increase in structural and chemical short range order (SRO) for slower cooling rates.
The HE-BMGs were subjected to tensile and compressive testing. At sufficiently low strain rates and temperatures shear banding could be observed. At room temperature the deformation was homogeneous. The strength of the HE-BMG was found to be higher than the strength of a simulated fcc CrMnFeCoNi nanocrystal (NC) and also shear band nucleation set in later compared to a conventional Cu-Zr glass.
Re-straining of our HE-BMG did not lead to the formation of a second shear band. Instead, the existent shear band continued to propagate.

The results show that the HE-BMG produced in this work is a promising new material, that should be investigated further. The chemical fluctuations in the material in combination with the amorphous structure lead to an extraordinarily high strength compared to the conventional Cu-Zr BMG and the CrMnFeCoNi NC. The structural SRO in the HE-BMG increases, the more time the glass has to relax, i.e. the slower the cooling rate.
Besides an improved mechanical strength compared to conventional MGs, there are also promising approaches to improve the ductility. Therefore, in future research, nanostructured HE-BMG samples ought to be studied. They can be obtained from the growth of crystalline precipitates in the BMG or from high pressure compaction of amorphous spherical particles. In both cases, the additional interfaces provide obstacles to the shear band which leads to an increase in ductility.