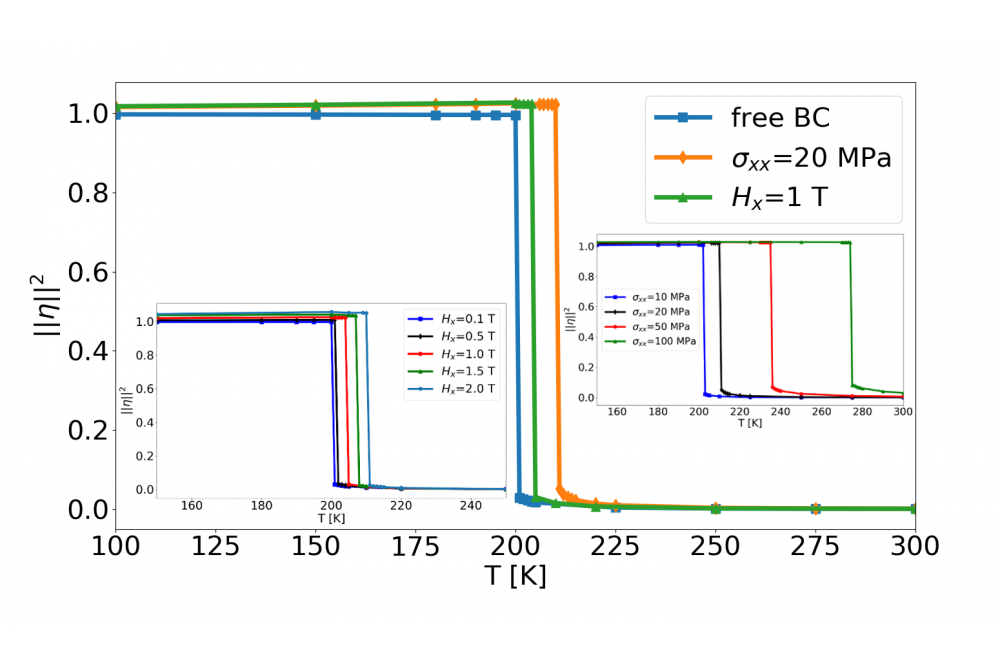 In 2018, Gottschall et al. proposed a multi-stimulit concept for magnetocaloric cooling. [1] The energy consumption related to cooling is expected to increase significantly over the next decades. Therefore, a more energy efficient and environmental friendly alternative is needed to satisfy the increasing demand. In the multi-stimui concept, the application of magnetic field is complimented with the application of mechanical stress to control the first-order phase transition, e.g. in Heusler alloys. Simulating the multi-stimuli concept using a micromagnetic phase-field model is supposed to support the development of a magnetocaloric cooling device by calculating the potential temperature change ΔTad within the multi-stimuli concept and for simulation of the heat exchange.

The model is shown to be capable of capturing the magnetic martensite state as well as the mangetic martensite to non-magnetic austenite transition. In the martensitic state, the proposed micromagnetic phase-field model is capable of reproducing multi-domain structures with the corresponding magnetic domain microstructure. The transformation of the martensite microstructure with applied stress and magnetic field is captured as well. The three-dimensional, finite-element implementation allows for the investigation of geometry and boundary condition dependent microstructures. In addition to the martensitic state, the modification of the micromagnetic formulations allows for the simulation of the magnetic to non-magnetic phase transition. Application of stress and magnetic field stabilizes the magnetic phase, shifting the transition temperature towards higher temperatures, see Fig. 1.

Ohmer, D. and Yi, M. and Fries, M. and Gutfleisch, O. and Xu, B. Calculating the magnetocaloric effect in second-order-type material by micromagnetic simulations: A case study on Co2B, Scripta Materialia 177 (2020) 218–222.