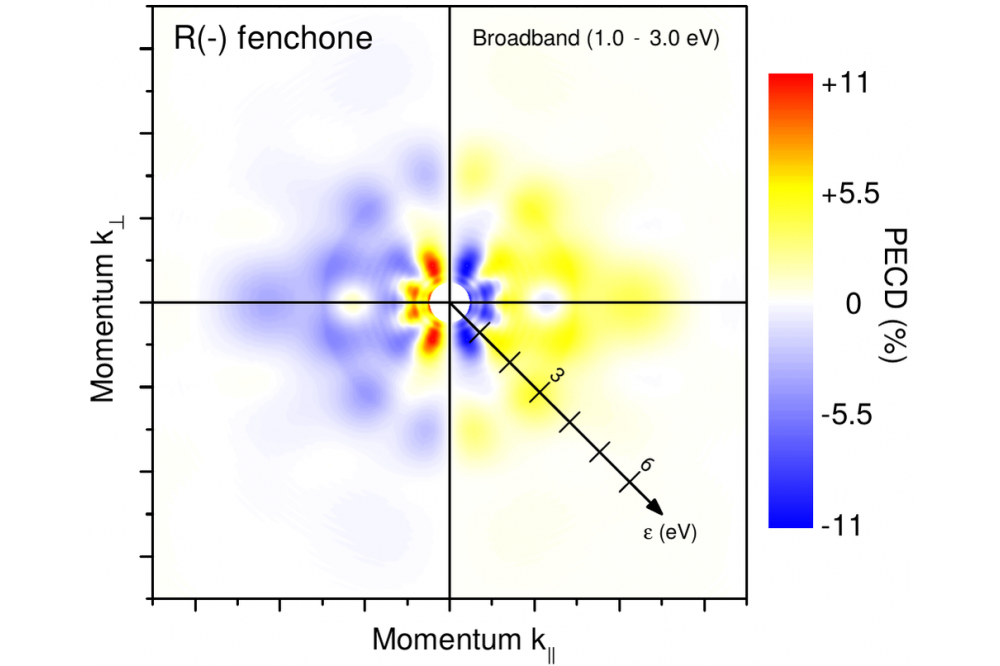 Our hands are an example for chiral objects: they cannot be brought to coincide with its mirror image by any rotations and translations. Not only our hands can be defined as chiral objects, but also many molecules. The general concept of chirality plays an important role all over the scientific spectrum, especially in physics, chemistry, biology and medicine. A recognition of enantiomers (the two mirror images) of a chiral molecule is highly desirable, since they interact differently with other chiral objects. This can have dramatic consequences. For example: some drugs contain chiral molecules where the one enantiomer cures a disease while the other is toxic.

In order to distinguish between chiral samples in the gas phase, the following effect can be used: a photoelectron, originating from ionization of a chiral molecule by circularly polarized light, exhibits a forward backward asymmetry with respect to the propagation direction of light. This asymmetry is mirrored, when the rotation direction of the light changes (from left- to right-circularly polarized light or vice versa). The difference of the photoelectron angular distributions (PADs) obtained for the two polarizations is called PECD and can be about 20%.

Using intense laser pulses gives rise to multiphoton ionization and makes chiral analysis in laboratories possible. Furthermore, laser pulses with a broad energy spectrum might open up ways to control the PECD. Calculating PECD is often a challenging task. This project provides theoretical support for experiments on the PECD by broadband pulses.

We use the time-dependent single-center method to calculate PADs in the multiphoton ionization regime. The method is based on propagating one active electron wave packet in the molecular potential in real time and space by solution of the Schrödinger equation in a numerical exact way. By construction, the method can deal with arbitrary laser pulses. Within a calculation, the molecule has a fixed orientation with respect to the light propagation direction. In order to simulate a gas of freely rotating molecules one has to consider many different orientations and each calculation takes roughly 3 days. The PADs need to be averaged over all orientations considered.

The calculated PECD can be seen in the figure above. The picture is shown in photoelectron momentum space (k∥, k⊥), and the pulse propagates along k∥. The signal is shown on the linear kinetic energy ɛ = k2/2 scale in eV as indicated by the incline axis. The PECD is shown in percent of the maximal intensity of the spectrum obtained for one of the circular polarizations. Our calculations predict a PECD of the chiral molecule R(-) fenchone of roughly 10% for ionization by circularly polarized coherent broadband laser pulses.

These calculations considered coherent (bandwidth limited) broadband pulses, without chirp. This means, that photons with different energies are available at the same time. The next step is to consider chirped broadband pulses, where the photon energies are ordered in time. This might change the effect and open more possibilities to control PECD.