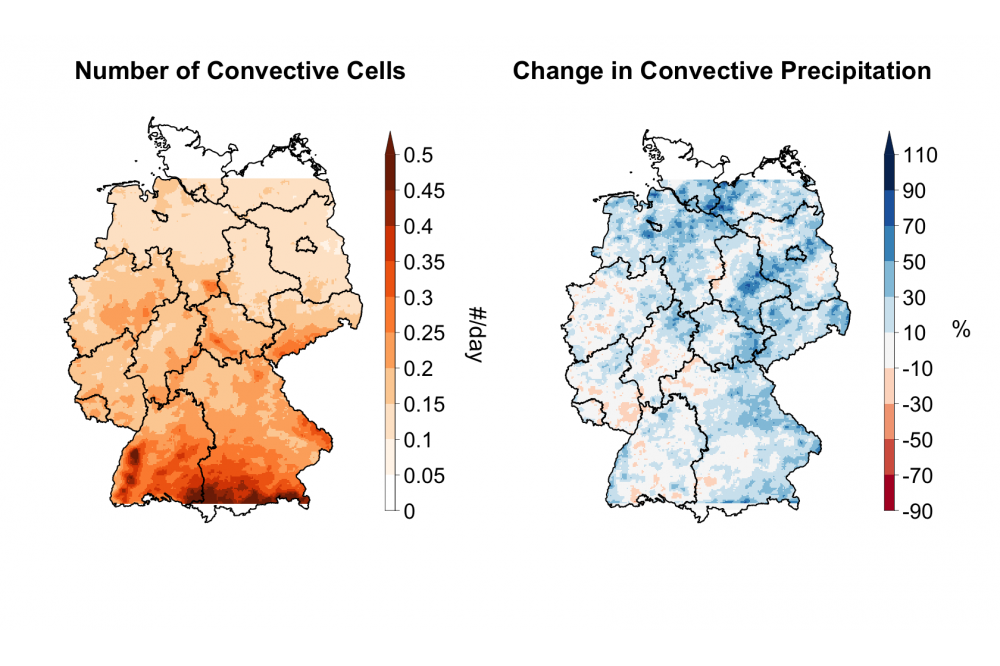 Atmospheric deep convection, commonly known as thunderstorms in its most severe form, poses a severe threat to human infrastructure via associated hazards like lightning, hail and intense small-scale precipitation causing flash floods. Because of their small typical scale of1-100 km and their interaction with processes on larger scales, these storms are still difficult to observe systematically and to model [1].

A general increase in the intensity of convective extreme events under global warming can be deduced from theoretical considerations about the hydrological cycle for warmer conditions [2]. However, sophisticated atmospheric models with a very fine grid-spacing (< 4 km), so-called convection permitting climate models, are necessary to estimate the magnitude of this increase. These computationally expensive models also allow for the investigation of individual thunderstorm cells [3].

We conducted convection-permitting climate simulations using the COSMO-CLM model [4]. The model projects the climate at current conditions and at the end of the century assuming a high emission scenario (RCP8.5). We used a tracking algorithm to extract characteristics of convective thunderstorm cells like lifetime, maximum intensity and area from the simulation results. Furthermore, we created a climatology of convective events by applying the tracking algorithm to radar data, and we compared this climatology to the model results in order to evaluate the model quality.

The spatial distribution of convective events is clearly coupled to mountain ranges which can act to trigger convection. However, extreme storms are less closely coupled to orography, but are more homogeneously distributed indicating that orography only plays a minor role in their development. Furthermore, there is a correlation between lifetime, intensity and area of cells. Small and less intense events are much more frequent than long-living, intense events. The model can represent the spatial distribution of increased convective activity in the mountains with minor deviations [5]. Furthermore, the frequency distributions of cell characteristics can be qualitatively well represented even though there is an overestimation of cell lifetime and an underestimation of intensity for the most severe events.

The total number of convective events is projected to stay approximately constant in the future. However, there is a shift towards larger and more intense events; for example, the number of extreme events (defined as event with a mean intensity above 25 mm/h) increases by ca. 170%. Lightning activity generally decreases in the future but is concentrated in fewer events which in turn have more lightning. The potential for hail increases.

The simulations provide valuable insight into the projected increase in convective hazards and the processes causing this increase. Uncertainty remains especially high for the projection of hail, whereas the model’s capability to simulate convective rain events and lightning [6] have been evaluated with good results. Furthermore, our simulations only cover one possible future climate realization. Using multiple climate realizations would be beneficial because global climate models vary in their projections of midlatitude climate change.