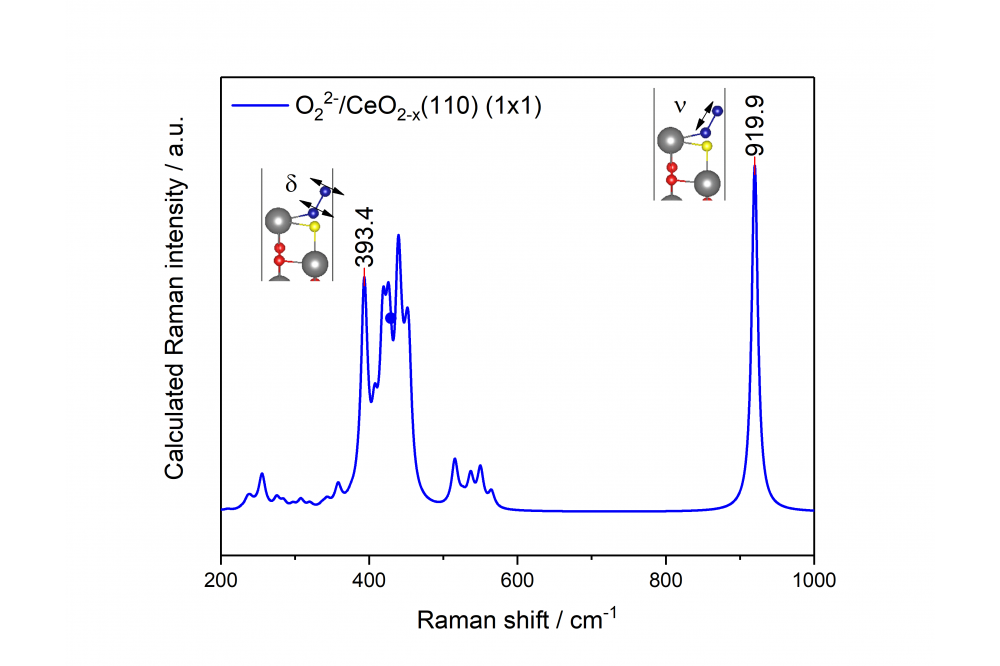 Figure 1: Calculated Raman spectrum for O22-/CeO2-x(110) with (1x1) periodicity. The band positions of the peroxide vibrations are indicated together with the corresponding symmetry. 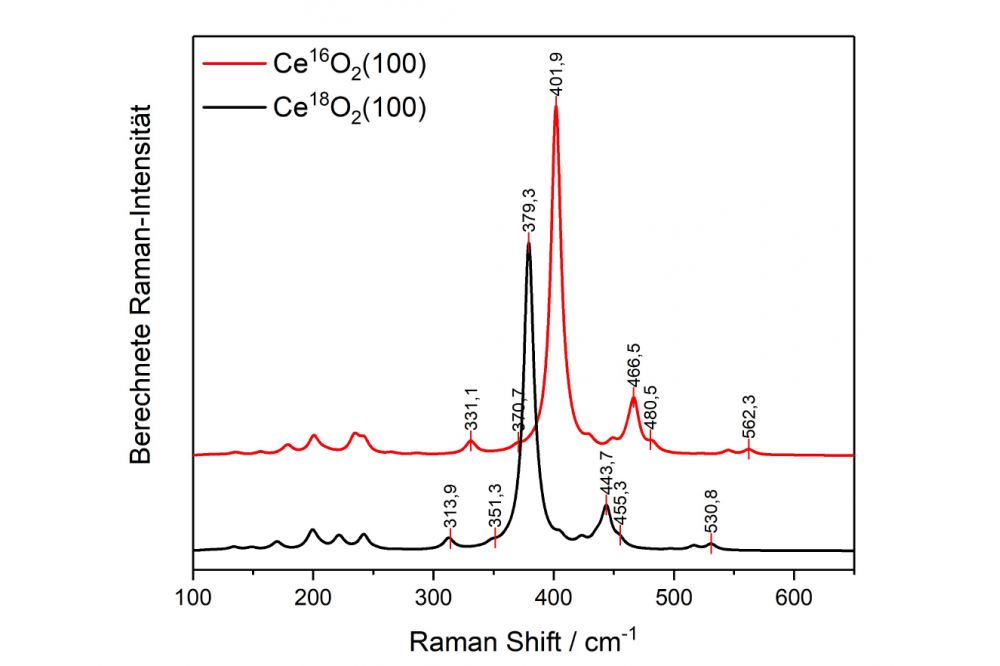 Figure 2: Calculated Raman spectra for CeO2(100) with c(1x1) periodicity. The spectrum for Ce16O2 is shown in red and that for Ce18O2 in black. The positions of the surface modes and the F2g band are indicated.

Ceria is an important support material for precious metals to catalyze oxidation reactions such as CO oxidation or the water gas shift reaction. Despite its widespread use, the role of ceria in the catalysts’ function, especially the influence of the ceria surface termination, is not well understood and is the subject of current research. Therefore, a combination of density functional theory (DFT) and Raman spectroscopy will be used to enable interpretations at the molecular level. Within this combination of theory and experiment it is possible to gain new insight into reaction mechanisms and the influence of the surface termination.

The general procedure is to perform a structure relaxation with tight convergence criteria within DFT+U framework. Then, a vibrational analysis is performed, where normal modes are calculated employing a method based on density functional perturbation theory (DFPT), followed by the calculation of IR and/or Raman activities. The calculation of Raman intensities is computationally demanding due to the fact that it depends on the third order derivative of the energy. These calculations, i.e., the simulations of the Raman and IR spectra, run in close interaction with the corresponding experiments to provide a direct interpretation of the experimental results.

In previous project periods, the most stable CeO2(111) and its interaction with small molecules from the gas phase was examined in great detail. In this project period, the goal was to understand the influence of the surface termination on the catalytic behavior. The CeO2(100) and CeO2(110) terminations are accessible by hydrothermal synthesis and can be modeled in theory. For the catalytic experiments the samples were loaded with gold and the gold structures were also studied theoretically.

First, we took a closer look at the oxygen activation, which is particularly interesting for reactions where lattice oxygen is needed, e.g. the water-gas shift reaction or the CO oxidation. Regarding the oxygen activation we can observe a strongly surface facet dependent behavior. Overall, we find facilitated peroxide formation at the CeO2(100) surface leading to distinct Raman signals. This is in line with the DFT calculations that predict the formation of a surface oxygen vacancy followed by peroxide formation as a net exothermic process at the CeO2(100) surface, but not at the more stable facets, namely, CeO2(110) and CeO2(111). As one of the surface peroxide features, we observe a Raman band at 354 cm−1, the symmetry of which had not been resolved yet in the literature. In combination with DFT calculations we readily can assign this band to a deformation vibration of surface peroxides (see Figure 1).

Furthermore, DFT calculations show that the interaction of gold with ceria depends on the surface facets and that gold lowers the defect formation energy, which is in line with our experimental results obtained during CO oxidation. Moreover, we detect an adsorbate band at 1647cm−1 for the rods, which contain both the CeO2(110) and CeO2(111) facet. Using the combination of theory and experiment this band can be assigned to carbonate species, which are formed at lower temperatures (60 ◦C); remarkably, and these carbonate species may block active sites, because of the strong adsorption energies on CeO2(100) and CeO2(110), and are therefore of relevance for catalysis.

To elucidate the mechanism of the water gas shift reaction we performed isotopic exchange experiments. In this context a strong red-shift of the F2g band, which is an indicator for lattice oxygen, is observed. This leads to the question how complete the exchange of lattice oxygen is. To answer this question, the shifts of the F2g band for a complete substitution of 16O by 18O were calculated using DFT calculations (for spectra of Ce18O2 and Ce16O2 see Figure 2), indicating a red-shift of 23 cm-1. Interestingly during the water-gas shift reaction a band at 1079 cm−1 is detected for the rods, which has not been discussed in literature. Using DFT this band can assigned to superoxides adsorbed on a CeO2(110) facet, which occurs at significantly lower wavenumber than on CeO2(111) or CeO2(100) facets. Furthermore, the exclusive occurrence of the 1079 cm−1 band under reaction conditions is in line with our DFT calculations, which show that superoxide adsorption is facilitated on a reduced surface. Thus, based on our experimental and theoretical findings, we can attribute the Raman band at 1079 cm−1 to superoxide adsorbed on a reduced CeO2(110) surface.
Summarizing, our results show the potential of a combined operando Raman and DFT approach to characterize e.g. adsorbates at the low index surfaces of ceria, which is of importance for a detailed understanding of the activity behavior of ceria-based catalysts.

The combination of DFT calculations and vibrational spectroscopy enables a detailed view of the reaction process. However, the obtained results are only as good as the theoretical model that is used for the calculated structures. For example, regarding the polar CeO2(100) surface it has to be considered that purely Ce- and O-terminating areas may also be present. Furthermore, it is difficult to predict the exact structure of the gold clusters on the surface, since the clusters are very small and difficult to see with imaging methods such as HR-TEM due to the contrast to cerium. For this reason, we calculate several smaller gold clusters in order to determine their influence.

Finally, it should be mentioned that the calculations are done within the PBE+U framework, which is a reasonable approximation in terms of vibrational modes. This is, however, different for electronic structures, for which the use of hybrid functionals (HSE06) is essential. Regarding the electronic structures, it is a future goal to be able to better understand the results from operando UV-Vis measurements with the help of theoretically calculated absorption spectra, which is a research area, which has great potential but has barely been touched in the literature.