Figure1: Shear band propagation (left hand side panel) in a heterostructure of a hard and soft glassy phases separated by an interface (dashed line).  Schematic representation of the shear band dynamics and shear branching mechanism in the two-zone heterogeneous glass (right hand side panel). 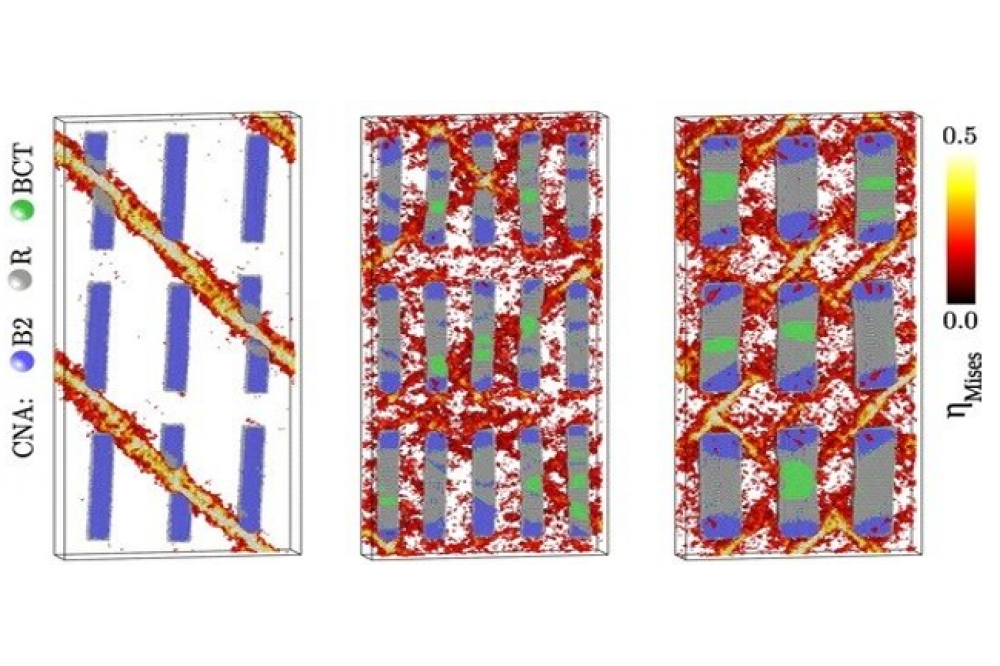 Figure2: Evolution of von Mises strain and the results of the CNA in Cu64Zr36 metallic glass composites with different numbers of sizes of B2 CuZr precipitates. For a better visualization only those atoms with an atomic strain higher than 0.2 are shown.

Holding unique characteristics, such as a high strength and large elastic limit, metallic glasses are advanced materials for structural and functional applications [1]. However, the current limits of metallic glasses are tied to their brittle behavior at room temperature [2]. A way to overcome brittle failure is the development of metallic glasses with heterogeneous microstructures. Heterogeneities such as crystalline heterogeneities [3] and structural heterogeneities with scales from a few nanometers to tens to hundreds of micrometers [4] represent effective constraints to the catastrophic propagation of shear bands (SBs) and promote SB multiplication [5,6]. The complex dynamics of shear banding are typically difficult to study because of the spatial and temporal confinement [7].

To overcome experimental technical difficulties associated with the observation of the fast processes of shear band propagation and interaction large-scale MD simulations were carried out using the LAMMPS software [8]. The atomic scale deformation mechanisms were analyzed by using the atomic von Mises, calculated by the OVITO analysis and visualization software [9]. The martensitic transformation process in the crystalline B2 inclusions and the dislocations activity in Cu phase were also monitored by the common neighbor analysis (CNA) scheme.

Two type of metallic glass composites have been studied: (1) Glass-glass composites consisting of phases with large differences in topoloy and/or elastic constants that display high elastic anisotropy under loading conditions and (2) metallic glass composites with shape memory crystals that, in experients, show together with enhanced plasticity also workhardening capability. The monolithic two-zone structure, which consists of a hard (relaxed) region and a rejuvenated (soft) region, was systematically constructed by removing randomly atoms of different percentages ranging from 1% to 5% only in one half of the sample creating in this way an interface along the Z-direction (see Fig. 1). Under loading a SB nucleate at the notch and start propagates in the hard region along a plane of maximum resolved shear stress. The SB widens at the interface and, finally, two bands are formed in the soft region. MG composites were constructed by inserting different numbers of B2 CuZr rectangular inclusions with different sizes in the monolithic glass (see Fig. 2). Our results reveal that metallic glass composites with a relatively low density of small B2 inclusions (14.1 vol.%) show homogeneous plastic deformation. The narrow spacing between the inclusions does not allow the STZs to percolate and form major shear bands. Reducing the number (volume fraction) of B2 inclusions in the MG composites yields the ductile-to-brittle transition. The distance between inclusions in 9n10uc composites is within the critical shear band length which in turn leads to a highly localized deformation process. Otherwise, to ensure the arrest of shear bands and hence, homogeneous plastic deformation, a larger fraction of B2 inclusions beyond 28% is required.

In glass-glass composites we found above the yield point the axes of activated shear transformation zones (STZs) show a wide range of inclinations and large deviation from the maximum resolved stress restricting the STZ percolation process and inducing shear band branching and multiplication (see Fig. 1). In conclusion, the proposed mechanism might apply to all heterogeneous metallic glass structures and disordered materials that are likely to form SBs and in which the residual stress/strain fields can be systematically controlled. In composites with shape memory phases the strong competition between the glassy and crystalline phases to accommodate the elastic energy promotes the formation of a highly organized pattern of multiple shear bands. Thus, by carefully choosing the density, size and spatial distribution of shape memory crystals, one can obtain MG composites that exhibit large tensile ductility for even a low-volume fraction of the shape memory phase.