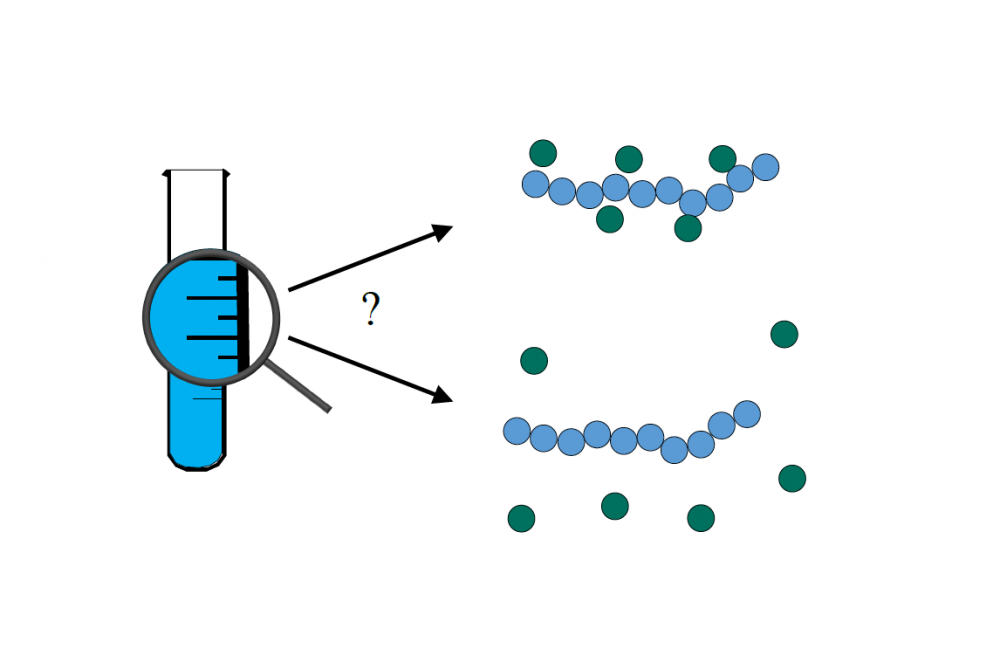 Folberth, Angelina_Influence of Osmolytes on the Solvation of Peptides and Model-Peptides

Figure 1: Question of the structural analysis: How is TMAO ordered around a peptide?

The influence of osmolytes, like Trimethylamine-N-oxide (TMAO) and urea, on protein folding is well studied, yet the mechanism remains elusive. TMAO levels in deep sea fish are correlated to the depth of their catch. [1] Therefore, TMAO is known to protect proteins against pressure denaturation. Urea, on the other side, denatures proteins and is often found in a 2 : 1 (urea : TMAO) ratio in cells with TMAO, where TMAO counteracts its denaturant abilities. [2] We will focus on shedding light on the mechanism of protein stabilization due to TMAO addition and protein denaturation due to high pressure and urea addition.

The aim of this project is to provide insight into the mechanism of protein stabilization upon addition of TMAO, especially at high pressure, by molecular dynamics (MD) simulations. Several TMAO forcefields are proposed, but none is validated against experiments in ternary systems. We used penta-alanine, a small peptide, which is soluble enough to predict preferential binding coefficients experimentally. This has been done by our collaborateurs, who found TMAO depletion. We used long MD simulations to validate our choice of forcefield and varied some parameters to explain recent findings of TMAO preferential binding in literature. [4]

We found that TMAO is preferentially depleted around small zwitterionic peptides with varying
peptide chemistry and pressure, although it accumulates in a second solvation shell. Furthermore, it decreases solvent-peptide hydrogen bonds, which, if we extrapolate the results to larger chains, can lead to destabilization of unfolded protein chains compared to the folded state. Then, we looked into the effect of TMAO addition on hydrophobic hydration and hydrophobic interactions of methane at different temperatures. Phenomenologically, we see that there is a temperature crossover of the TMAO effect on hydrophobic hydration, but not on hydrophobic interactions. Due to the use of a simple methane molecule, we are able to split the solvation process into different contributions using an exact expression derived from the potential distribution theorem. We see that TMAO leads to a lower solvation heat capacity, the trademark of hydrophobic hydration. Furthermore, we found out that the preferential TMAO binding at higher temperatures is due to a dewetting of the methane surface. To further understand the effect of TMAO on protein aggregation, we look into the dimerization of two polyalanine-a-helices. This project has been started in the recent project period, where we see that this model can be used to obtain the Potential of Mean Force (PMF). It will be continued in the following project period. The projects we use to broaden our understanding of TMAO vary from simulations of big ternary protein systems, to smaller model systems. We use computationally expensive methods to obtain equilibrium quantities, often running tens of simulations simultaneously. Therefore, usage of a high performance cluster is vital for these studies.

Folberth, A. et al.: Pressure, peptides and a piezolyte - A study on TMAO effects - Poster at the, 10th International Meeting of Biomolecules under Pressure, Dortmund, 02.10.19

[2] Lin, T.-Y.; Timasheff, S. N.: Why do dome organisms use a urea-methylamine mixture as osmolyte? Thermodynamic compensation of urea and trimethylamine N-oxide interactions with protein. Biochemistry, , 33, 42, 12695, 1994