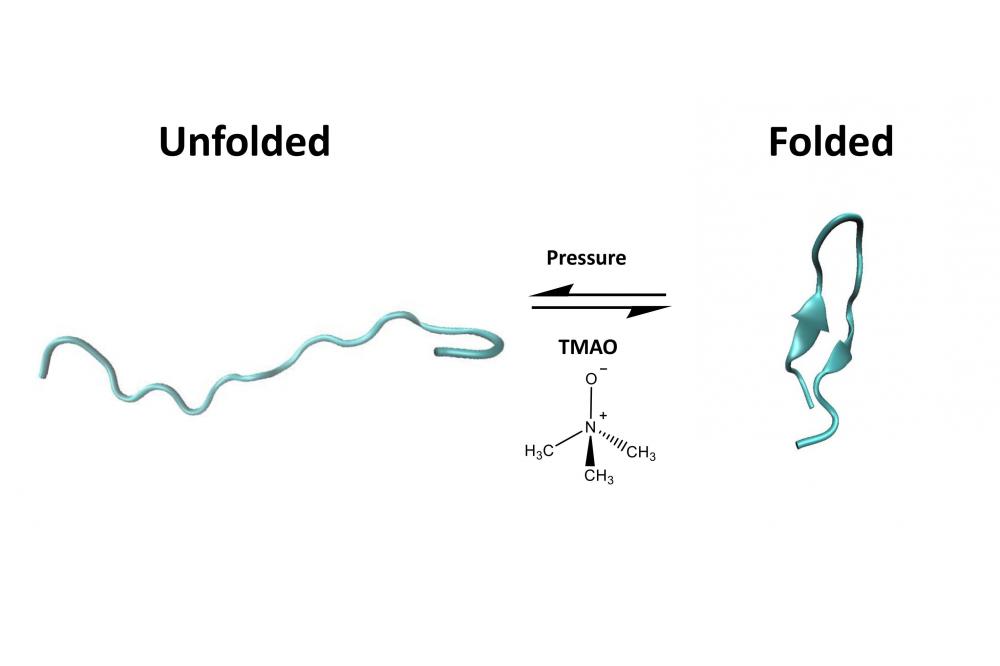 Trimethylamine-N-oxide (TMAO), a molecule known to stabilize proteins in harsh environments in aquatic organisms, has become of interest in recent medicinal studies due to the connection of TMAO and a large number of diseases common in the western world [1]. TMAO is generated by our gut microbiota converting dietary nutrients like choline, phosphatidylcholine, g-butyrobetaine and L-carnitin to Trimethylamine (TMA) and afterwards to TMAO. TMAO levels have been found to correlate to diseases such as aortic atherosclerotic plaque, increased thrombotic risks, end stage or chronic kidney diseases and it might trigger vascular inflammation. As TMAO seems to have a considerable impact on proteins in humans, the influences of TMAO on protein structure are of major interest and subject of latest research.

Furthermore, TMAO is known as a “piezolyte“ in deep sea fish. The extracellular fluids contain high sodium chloride concentrations, while the intracellular fluids are enriched in TMAO, which counteracts osmotic stress and is compatible to intracellular proteins and biomolecules [2]. TMAO, unlike glycine or other common osmolytes, counteracts denaturation effects due to hydrostatic pressure. In particular, there is a correlation between TMAO levels and the depths of the capture of deep sea fish.

The influence of TMAO on the stability of proteins has been widely studied, yet, there is still no consensus about the mechanism. The aim of this project is to provide deeper insight into the mechanism of protein stabilization upon addition of TMAO, especially at high pressure by use of molecular dynamics (MD) simulation. MD simulations are able to provide a different perspective since the folding equilibrium can be observed on an atomistic level. Thus, by complementing experiments, MD simulations serve as a useful tool to determine the mechanism with a more profound knowledge.

In this project I would like to address the topic pressure denaturation and the counteraction of TMAO to stabilize proteins. While studies using pressure on proteins have already given good explanations for the phenomena explored [3], studies on TMAO effects have not yet reached a consensus [4]. Furthermore, the stabilizing effect of TMAO at high pressure has mostly been explained by extrapolating results at ambient pressure. Using solvation thermodynamics, I would like to study the effect of TMAO on model-peptides at different pressures. This might not only provide a more defined picture at high pressure, but also give new hints about the mechanism at ambient pressure.

Therefore, the newly developed TMAO model by Hölzl et al. [5], will be used to study the problem with molecular dynamics. The model of TMAO is optimized at ambient and high pressures. First, the structure of the solvation shell of small peptides will be analyzed at different TMAO concentrations and pressure. This might hint to possible mechanism of the stabilization of the folded state of proteins due to addition of TMAO. Secondly, the  hydrophobic interaction of polyalanine helices will be analyzed, mimicking the formation of a hydrophobic core in proteins when forming tertiary structures. Fluctuations play a major role when hydrophobic particles aggregate. Thus, we will study the change in fluctuations and energy upon aggregation with and without TMAO and at increased pressure.

Studying the solvation shell of peptides revealed that TMAO is depleted from the peptide surface but remains close to the peptide in a second solvation shell. Pressure has a small effect on the solvation shell compared to TMAO. he aggregation of polyalanine-helices was studied and we found that TMAO increases volume fluctuations, hinting at an important change in entropy. Furthermore, there was no change in the energy difference between aggregated and separated state when adding TMAO. Thus,  TMAO can only influence the aggregation of polyalanine-helices through entropic effects.