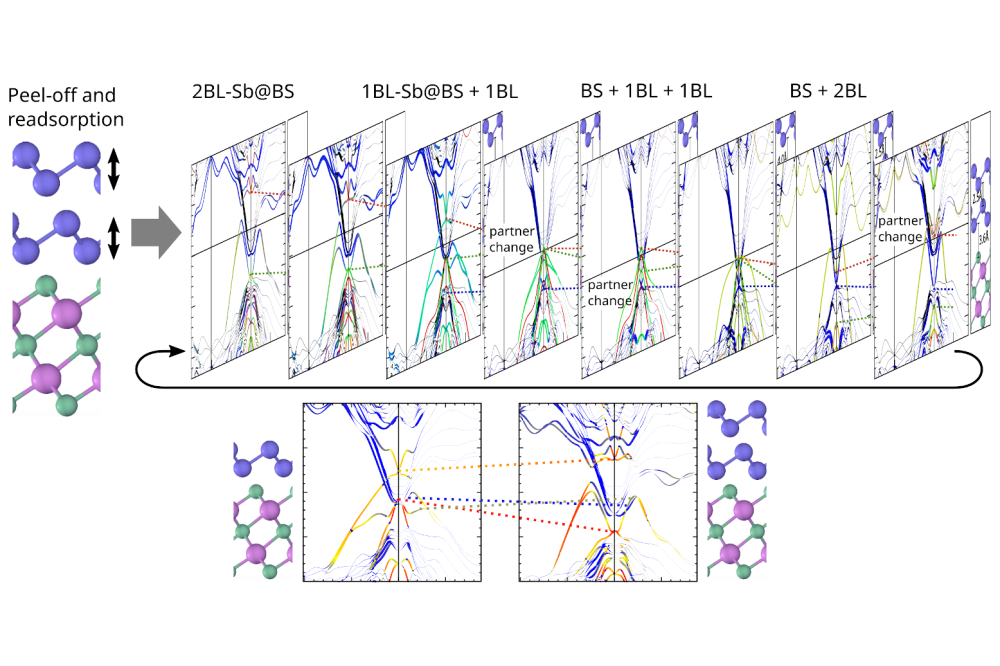 Figure 1: Schematic overview of the simulated desorption and readsorption process of the antimony on Bi2Se3 system. The series of band structure snapshots allows for a tracking of the band crossings at the G point and thus for the identification of topological phase transitions [2]. 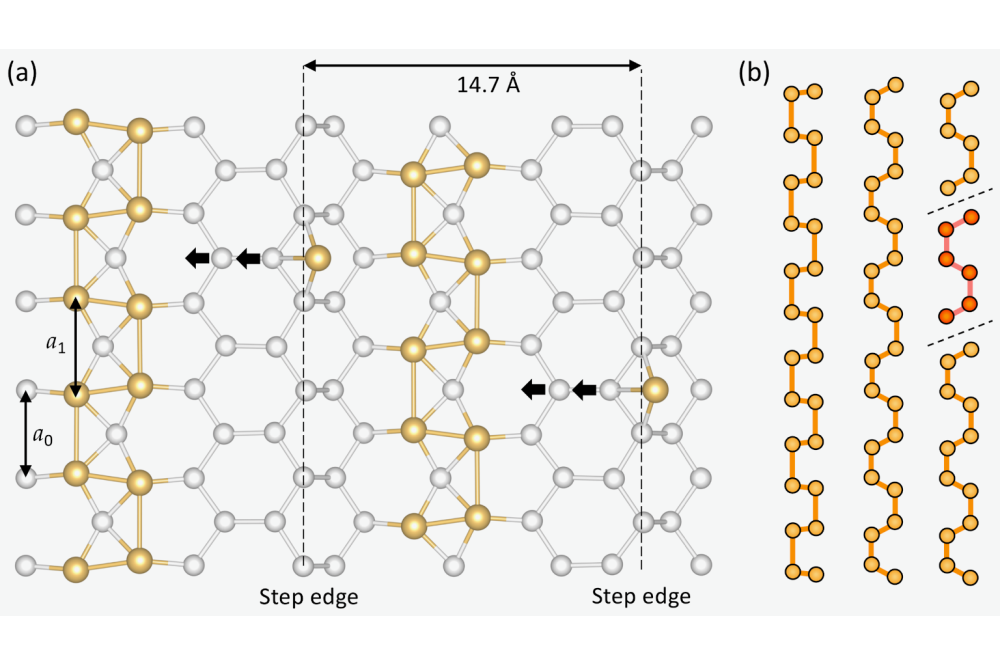 Figure 2: “(a) Optimized Si(553)-Au surface with Au adsorbed at the Si step edge. The surplus coverage corresponds to 1 Au per (56) unit cell, or 0.03 ML. Si is white, Au is yellow, a0 is the Si(111) lattice constant. (b) Schematic representation of the Au chains, before and after Au adsorption, or with an antiphase segment between two idealized stacking faults.” [3].

Ideal one-dimensional (1D) electronic systems are fascinating, as they show quantisation of conductance, charge-density waves, Luttinger liquid behaviour, as well as a variety of instabilities. They are realised as substrate-supported atomic wires and extremely exciting concerning fundamental research and their potential application in novel components in nano- and micro-scaled devices.

We have investigated two types of nanowires growing on Si(hhk) substrates, the stepped version of Si(111). The first, gold on Si(553), is characterised by 1D-metallic double chains of Au atoms which are stabilised by neighbouring surface step edges and Si honeycombs. Our research addressed the effects from additional Au atoms and excess charge on the structural and electronic properties of the Au chains.

The second, rare earth silicide (RESi2) structures on the Si(557) surface can be derived from the RESi2 monolayer growing on Si(111). The steps of Si(557) interrupt the metallic 2D film leading to nanowires covering the narrow terraces. While the dense coverage still has 2D electronic properties, nanowires separated by empty terraces feature quasi-1D dispersion. Our research targeted the dimensional crossover from 2D to 1D.

We also examined the antimony on bismuth selenide system, a heterostructure involving a topological insulator (TI) surface. TIs feature topologically protected surface states, which are stable against non-magnetic variations of the surface morphology. The stability and uniqueness of the surface spin texture renders TIs like Bi2S3 promising candidates for application in spintronics. We explored the origin of the complex band structure resulting from the adsorption of the Sb adlayer on Bi2Se3 substrates.

The central approach is the density functional theory (DFT) in combination with the plane-wave ansatz for periodic systems. DFT maps a correlated system of many interacting electrons on an effective system of non-interacting particles.

We set up unit cells containing the structure models and calculate the electronic ground state density and energy. These enable further investigation: ionic relaxation, phonon dispersions, ab initio thermodynamics, quasi-particle energies and derive response functions. Since the supercells of our systems easily exceed several hundreds of atoms, high-performance computing facilities are necessary for the solution. Because of the multiple levels of splitting the numerical problem into independent parts (most importantly the subspaces of k-points and bands), the DFT codes can take great advantage from parallel machines.

Sb@Bi2Se3. The intertwinement of the topologically trivial Sb adlayer (β-Sb) with the topologically non-trivial Bi2Se3 surface was illuminated by simulation of a desorption and readsorption process. The Sb layer is lifted step by step, for which each the electronic band structure is calculated. The resulting series of snapshots gives deep insight into a complex series of topological phase transitions [1,2].

Au@Si(553). Additional gold atoms tend to adsorb at the step edges, with some distance to the Au double chains. However, they indirectly increase the dimerisation of the Au chains by charge injection, similarly to additional electrons. As the dimerisation penalises the formation of naturally occurring stacking faults within the gold chains, the Au adsorption enhances the order of the whole system, despite adsorbing in an unordered manner. The order-by-disorder effect is transferable to other nanowire systems and observable in the experiment [P3]. Moreover, it explains vibrational features, useful for structural identification by means of Raman spectra [4].

RESi2@Si(557). While dense RESi2 coverages of the stepped surface yield a 2D band structure and Fermi surface, additional features appear when the density is gradually reduced (introduction of empty terraces). The theoretical model identified these features as 1D states at the edge of RESi2 streaks, only present when the adjacent terrace is empty. Thus, the joint experimental and theoretical work describes a fascinating and unique dimensional crossover in this system [5].

This project gave fascinating insights into the physics of systems confined to lower dimensions. Although some of the phenomena can be derived by simplified models, it is still exciting to see that the reduction of dimensionality can also be embedded into the ordinary three-dimensional space. Although the investigation of the systems described above must be considered as fundamental research, their understanding paves the route towards advanced electronic devices. We gratefully thank the HRZ of TU Darmstadt whose computational resources were crucial for obtaining the above results.