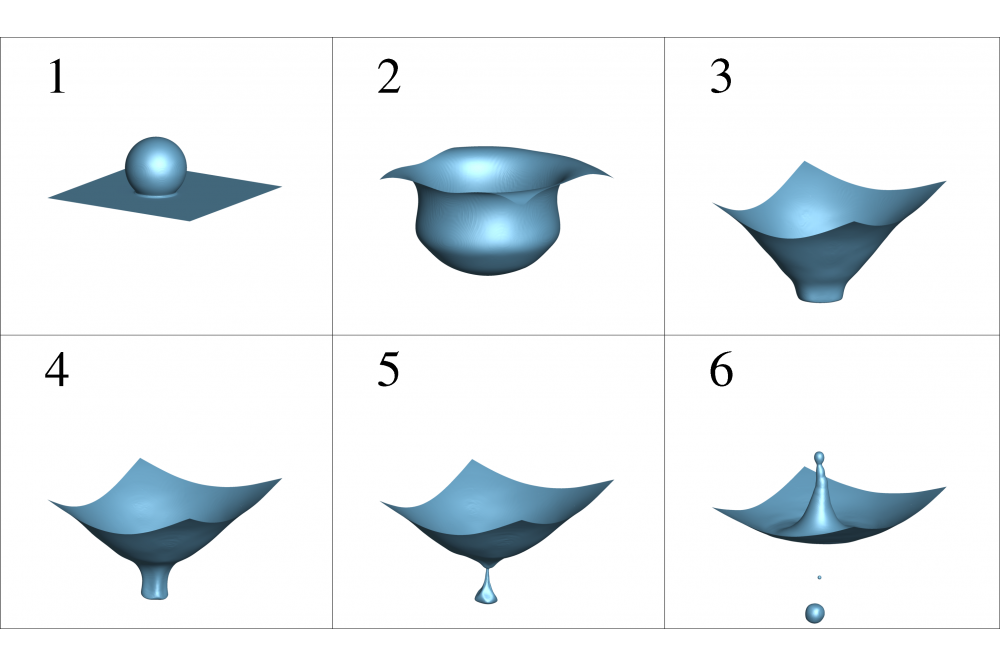 Since the beginning of the past century people are interested in the mechanisms which produce the sound caused by a drop impacting into a pool. Over the past decades various researches studied the flow regimes during the drop impact experimentally or numerically. The outcome of the same studies showed, that there is a distinguished flow behavior under certain conditions, which were characterized by the impact velocity, the drop diameter and the surface tension. The flow behavior is characterized by a bubble which detaches from the bottom of the cavity after impact. The formation of a bubble in the liquid was found to coincide with the start of a sound pulse. Although no experimental work has proven this theory, it was assumed that the airborne sound results from the underwater sound field propagating through the water-air interface. However, recently progress was made in determination of the source of the characteristic so-called ’plink’ sound. An oscillation of the bottom of the cavity, induced by the detached air bubble, was found to be the source.

To numerically reproduce the sound of a drop impact, simulations of multiphase flows and acoustics are necessary. Various methods solving the acoustic and multiphase part are existent, but few works handle a coupled simulation. In this work we are simulating the acoustics of a water drop impacting into a water pool. To ensure that all physical phenomena are capture properly, the use of high performance computing is essential. High resolution in time and space lead to enormous computational resources, which can only be provided by a cluster.

For the simulations we are using our finite-volume framework FASTEST solving the incompressible Navier-Stokes Equations extended by the Volume-of-Fluid method for the multiphase flow and the Linearized Euler Equations with a high-resolution scheme for the acoustics. The momentum equations of the Navier-Stokes Equations are extended by a surface tension term and an additional transport equation for the multiphase flow is employed. In the Volume-of-Fluid methodology, the volume fraction of a cell is either 0, 1 or lies between 0 and 1 and therefore, is labeled as an interface cell. Material quantities in the Navier-Stokes Equations are depended on the volume fraction, so that the fluid motion depends on the multiphase advection and the other way around. To advect the multiphase flow the compressible M-CICSAM scheme is employed. This scheme blends the compressive Hyper-C-Scheme and the high-order FROMM-Schemewith respect to the angle of the interface normal to the normal vector connecting the donor and the acceptor cell.

In general the surface tension computation decreases its accuracy the more the interface value tends to 1 or 0. For this reason different improvements, e.g. a volume fraction based weighting, are implemented and were part of the previous investigation. From a physical point of view acoustics are compressible phenomena. With the approach used in this proposal, an incompressible flow gets superimposed with the acoustic quantities. This viscous/splitting approach leads to the inhomogeneous Linearized Euler Equations for the computation of the acoustic quantities. The source term for the acoustics is derived by the change of pressure from one time step to the next. In case of multiphase flows, a pressure jump over an interface can occur. To avoid spurious acoustics in the presence of an interface, additional restrictions are included. For example, no acoustic sources are allowed in the vicinity of the interface.

Different results are obtained with the project so far. First of all, a working framework for simulating complex coupled multiphase acoustic test cases in parallel was developed. Secondly,a surface tension model, which is accurate and not expensive with regard to computational costs, was found and tested. Finally, the coupled drop impact test case was performed with promising results. An acoustic pulse occurs, right at the detachment of the small bubble. Small oscillations occur in the airborne acoustics as well.

Because of the small amount of different simulations on the fine grid, it is not clear, where the oscillation is produced. It is necessary to investigate, whether the oscillation in the airborne acoustics emerges, as desired, from the detachment process or from different effects.

Friedrich, Jonas and Schäfer, Michael: Towards an Acoustic Simulation of a Water Drop Impactingin a Water Pool. Flow Turbulence Combust (2020).