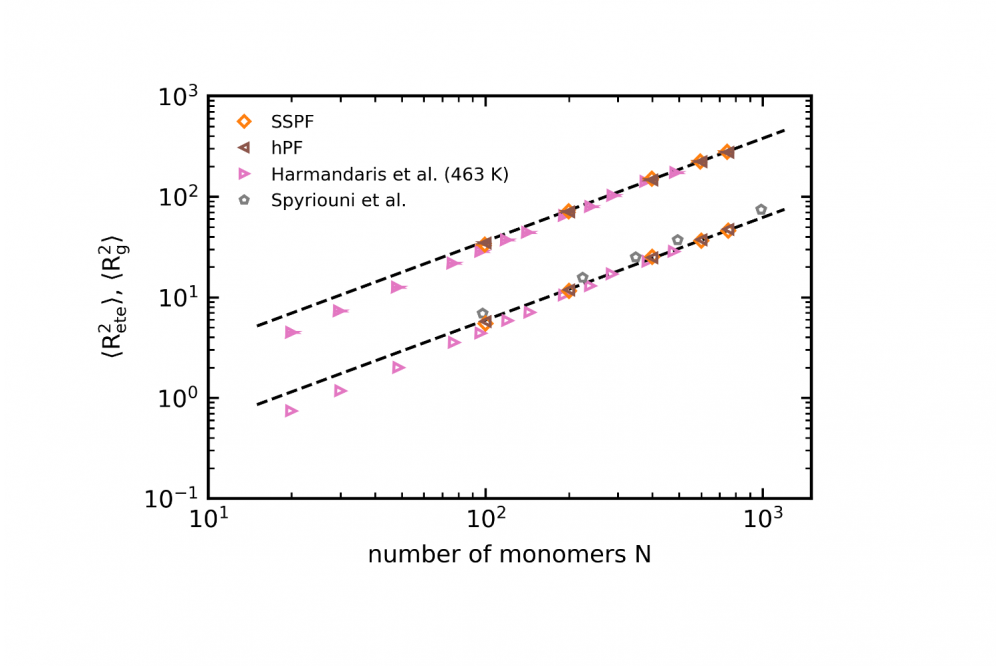 Figure 1: Mean-square radius of gyration and Mean-square end-to-end distance of particle-fieldsimulations with (orange) and without (brown) slip-springs as function of chain length N. The green and purple markers are results from the coarse-grained molecular dynamics simulationsof reference. The dashed lines are the power law fits to the slip-spring particle-field model. 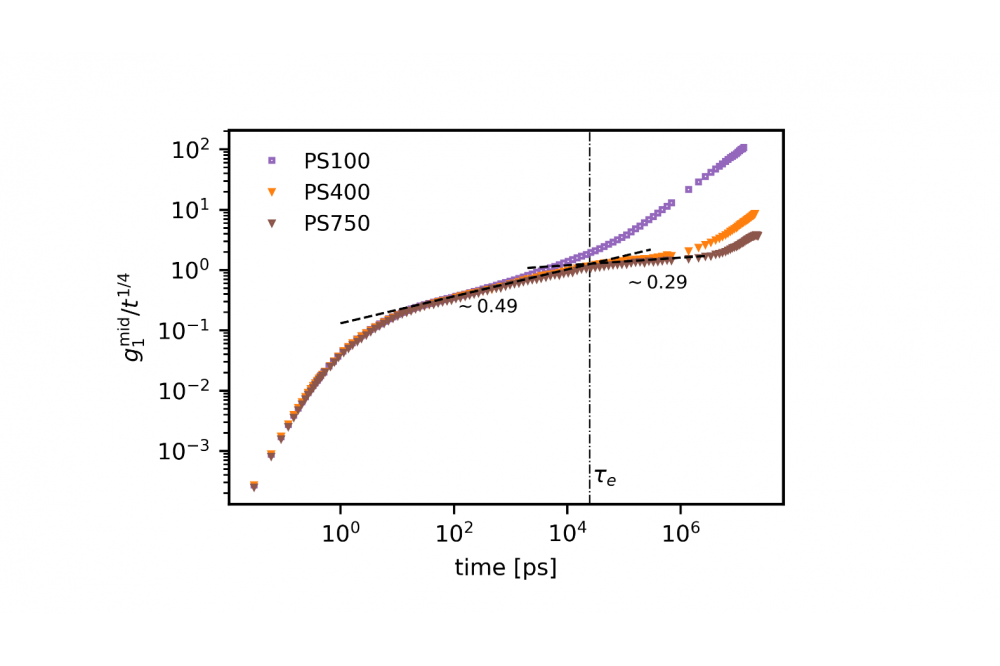 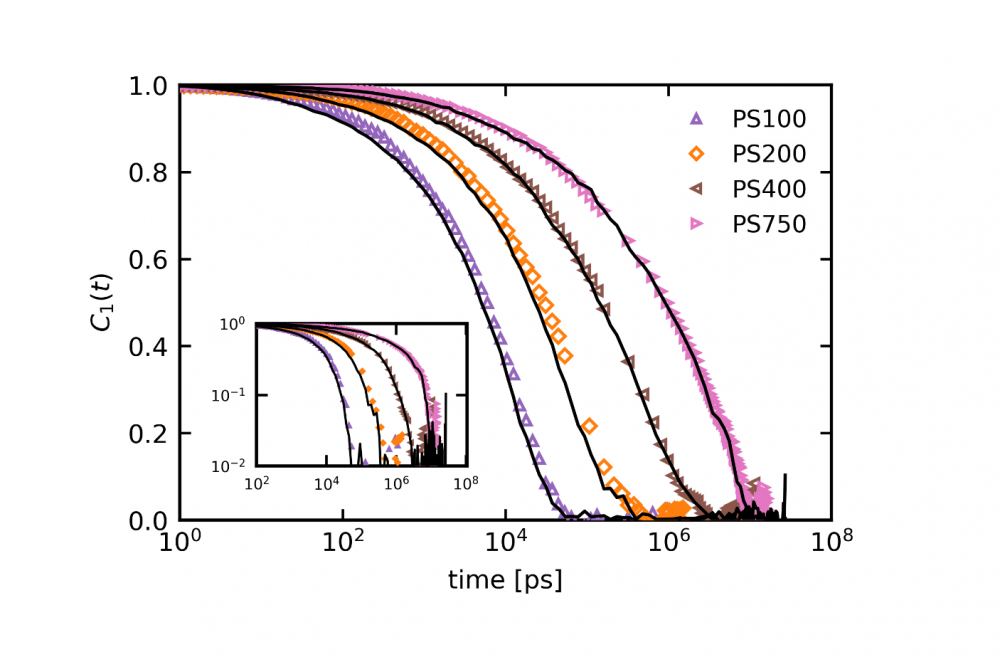 Entanglements between polymer chains are demonstrated as one of the key factors to modulate the macroscopic physical properties of polymeric fluids. During the last half century, comprehensive understandings of this topology-property relation have been pushed forward via extensive theoretical and experimental studies. However, the bottom-up prediction of the dynamical and rheological behavior of polymers at high molecular weight continues a major challenge.

As the recent development of computational material science, all-atomistic (AA) molecular dynamics simulations have emerged as one of the most powerful tools to attain the molecular-level understanding of structure-property relations in rich areas of polymeric materials. However, the profound increase in relaxation times and viscosity of polymers with increasing molecular weight essentially limits the usage of AA simulations. This requires modeling techniques that can access extended time and length scales while retaining chemical specificity, such as the atomistic-derived coarse-grained (CG) modeling.

The hybrid particle-field (hPF) simulation is becoming a promising candidate for modeling large-scale polymeric systems with chemical details mainly because of its efficient computation of non-bonded interactions between particles. However, the entangled dynamics of polymer melts is lost due to chain cross ability. Chains cross, because the field-treatment of the interactions makes them effectively soft-core.

We introduce a multi-chain slip-spring model into the hPF scheme to mimic the topological constraints of entanglements. The study of long-chain entangled polymers and a large parameter space of the slip-spring models require large simulation systems and multiple runs for testing the influence of each parameter. These prerequisites can only be met on high-performance computers (such as Lichtenberg).

The hybrid particle-field (hPF) simulation approach employs an efficient implementaion of density-functional-field potential for non-bonded interactions between particles. This density field potentials are effectively soft-core, allowing the chain interpenetrate each other. The structural properties are well-preserved without altering by this soft-core feature while the dynamics is becoming physically incorrect, especially for entangled polymeric fluids.

In order to take advantage of the efficiency, meanwhile, avoid the unphysical dynamical mechanism, a multi-chain slip-spring model is introduced to the scheme of hPF, imposing an additional dynamical constraint. This slip-spring based particle-field (SSPF) model is promising for modeling the entangled polymers, with the reptation dynamics of entangled polymers recovered.

The method combining the hybrid particle-field simulation with a multi-chain slip-spring modelis applied to model the monodisperse polystyrene melts. This model predicts chain structures of polystyrene melts of various chain lengths, the radius of gyration and end-to-end distance of which are consistent with the previous molecular dynamics simulations (Fig. 1). The dynamics including the mean-sqaure diffusion, diffusion coefficients and the end-to-end vector relaxations are also characterized from our model. The different scaling regimes are observed from the mean-square diffusions of segments (Fig. 2), where the scaling exponent 0:29 signals the reptation dynamics coming from the strong dynamical confinement from the slip-springs.

As seen in Fig. 3, the auto-correlation functions of the end-to-end vectors of hybrid particle-field model with slip-springs sit on top of the results of the corresponding molecular dynamics simulations in systems of various chain lengths, indicating the reorientational dynamics of our model is well-preproduced compared to the classic molecular dynamics simulations. The application of the slip-spring based particle-field simulation to systems with different segments for studying their dynamical properties is exciting and promising.