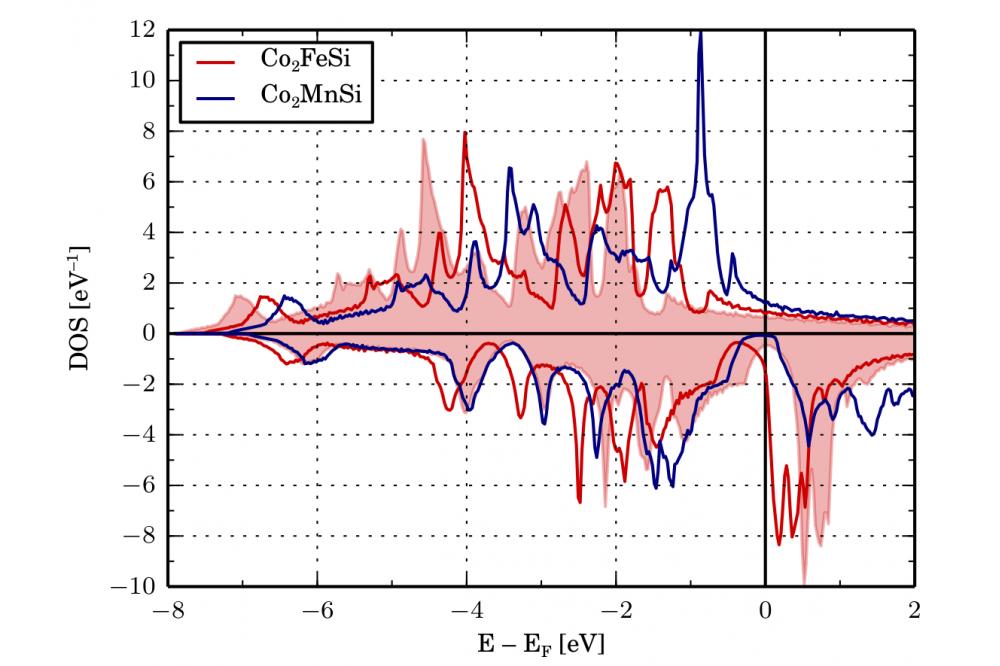 Fig. 1: Density of states for Co2FeSi (red) and Co2MnSi (blue) in generalized-gradient approximation (GGA). The latter has a band gap at EF and behaves therefore half-metallic, while the first does not. Filled: FSM calculation.

Some Heusler alloys, for example intermetallic compounds of the stoichiometric composition X2YZ with L21 structure,[1] are assumed to be half-metals: one spin direction shows metallic behavior at the Fermi energy EF, while the other channel has an energy gap.[2]

Thus, they could be employed as spin filters to assemble devices with near infinite (tunnel) magnetoresistance. As they further carry high magnetic moments at the order of 3 to 6µB, [1, 3] they are promising options for the construction of spintransfer torque magnetic random-access memories (STT-MRAMs).

Since our experimental collaborators at Bielefeld university are especially interested in magnetic tunnel junctions (MTJs) containing Co2FeSi and its inverse Heusler Fe2CoSi, we calculated the magnetic moment, band structure, density of states (DOS), and transport properties of bulk Co2FeSi and, as a reference, Co2MnSi. These calculations were done using our density-functional theory (DFT) [4] based Korringa-Kohn-Rostocker (KKR) Green's function formalism code.[5]In non-relativistic generalized-gradient approximation (GGA), Co2FeSi has a magnetic moment which is much lower than the theoretically expected value.[6]  In addition, no half-metallic behavior is observed. Although published results vary drastically,[6] our result is still much lower than the average published value. Changes in the exchange-correlation functional produced values as low as 4.94µB, whilst taking relativistic effects into account proved to be nearly ineffective. Co2MnSi, in contrast, behaves much better: The magnetic moment in non-relativistic local spin-density approximation (LSDA) is near the theoretically predicted value, and this result may readily be improved by employing a GGA. Further, this Heusler compound displays half-metallic behavior, as the band structure shows a direct band gap at the gamma point for the minority spin polarization, which is reflected in a near zero-valued minimum in the DOS around EF (Fig.1), and a vanishing transmission rate for the corresponding spin. , 86: 0544

We assume that our computational scheme might underestimate the magnetic polarization. To verify this, we implemented a fixed spin-moment (FSM) method, being a slight generalization of.[7]  This allows us to perform DFT calculations analogous to (Meinert et al.).[8]

We performed two FSM calculations: The first with the total magnetic moment fixed to the theoretical 6µB, the second with atomic moments fixed to the experimental values from x-ray magnetic circular dichroism.[8] The effect of both was to shift the minority bands up by ΔE/2 and the majority bands down by the same amount, which lead to corresponding displacements in the DOS. This is to be expected, as the fixation of the magnetic moments is done by shifting the potentials accordingly. Given the case of Co2FeSi, no band gap opens, and the Heusler thus stays metallic. In conclusion, the possible underestimation of magnetic moments in our computational scheme seems not to be the major issue when trying to predict (half-)metallic behavior.

With regard to our results, calculations on Co2FexMn1-xSi might show that the different properties of both alloys may be combined to gain even higher performances.