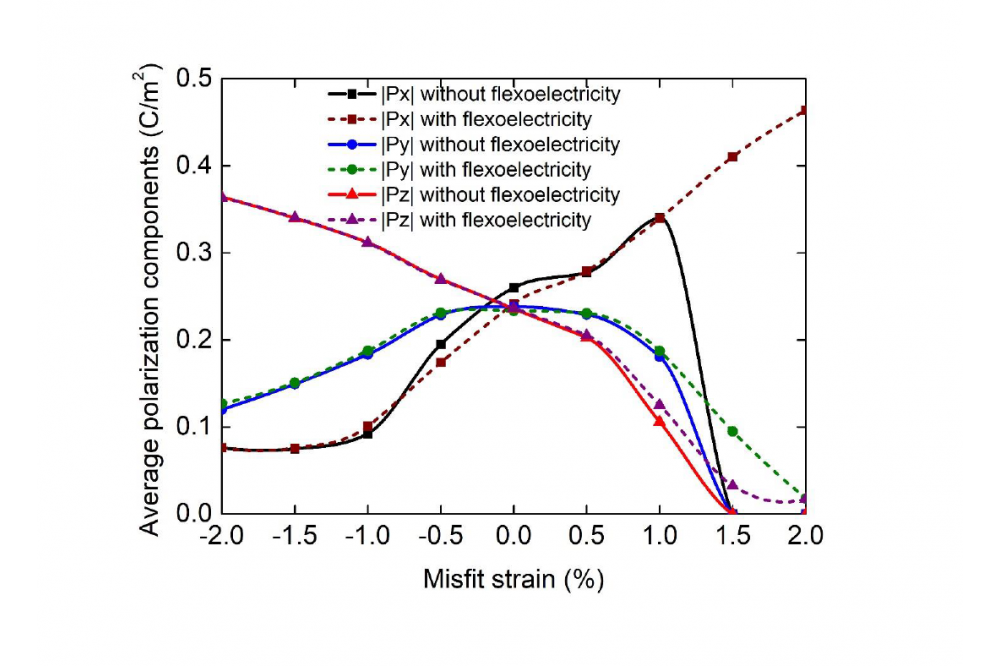 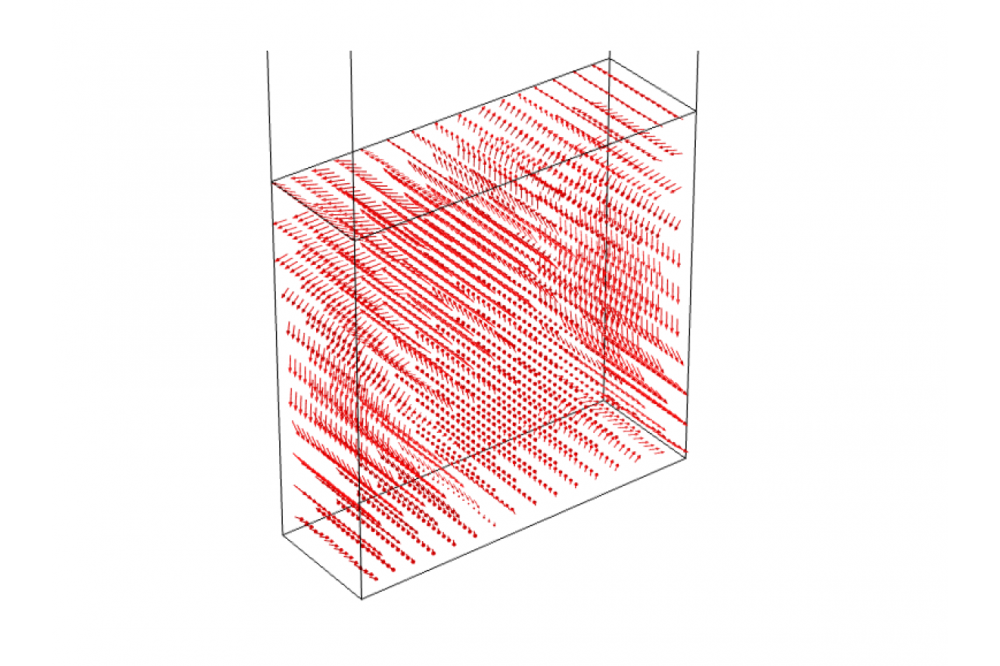 Figure 2: 24-nm film cross-section with an example of the rhombohedral domain structure with the flexoelectric effect accounted for and the substrate mismatch strain of -0.5%.

Thin films of lead zirconate-titanate (PZT) belong to the most widely used ferroelectric materials. They possess large piezoelectric coefficients and high thermal stability, allowing to use them for diverse applications, especially in electromechanics. Many actuators, piezo-sensors and ultrasonic devices are made using this material. PZT films with a rhombohedral unit cell exhibit better characteristics. Theoretical study and modelling of this phase are important to reveal the influence of the substrate mismatch strains and other effects on the film properties. Those effects include the flexoelectricity, charged defect states on the surface and elastic defect dipoles. The rhombohedral structural phase makes theoretical and numerical studies more difficult, with a need to keep simultaneous track on all spatial components of electrical polarization and elastic variables, which is why there is a scarcity of result for the films with such structures. The Landau-Ginzburg-Devonshire theory together with the Finite-element method were used to produce a continuous phenomenological model of the ferroelectric film and establish the influence and cooperative impact of the aforementioned effects on the polarization domains inside the film.

A thin ferroelectric film is considered, fixed at the bottom on a substrate with a predefined uniaxial mismatch strain (from compressive -2% to tensile +2%), and its top surface exposed to the ambience from where surface charges can be gathered forming the screening charge, predefined by a parameter of the surface screening length. A model consists of the system of equations derived from the free energy expression. The electric polarization is described by the Landau-Ginzburg-Devonshire equation, the Poisson equation describes the behaviour of the electric potential, the generalized Hooke’s law with its equilibrium condition establishes correspondence between stress and strain with an inclusion of electromechanical effects such as electrostriction and flexoelectricity, as well as elastic defect-produced field. The system of partial-differential equations (PDEs) is solved using the Finite-element method. A computation box is created with the top and bottom boundaries mimicking the free top and the fixed bottom surface, and lateral boundaries are given the periodic conditions. The box is split into a mesh of finite elements, its node points each with their own basis function. The number of nodes define the accuracy of the computation and the resources needed to perform it, since the system of equations must be solved for each element. For solving PDEs using the Finite-element method, the software package of COMSOL Multiphysics has been used.

The FEM modelling revealed significant dependencies of domain states inside the PZT films on the mismatch strain, flexoelectricity, surface charged defects, and elastic volume defects. The immediate effects of flexoelectricity and elastic dipole include changing the shape of domains and change polarization vectors by orientation and absolute value, thus acting as if being an additional field. The most significant effect is shown by the mismatch strains, that not only influence the shapes of domains, but also change the film’s symmetry. Strong compressive mismatch turns the structure quasi-orthorhombic, with one in-plane and one out-of-plane components of the polarization vector. Strong tensile mismatches can unexpectedly eliminate polarization whatsoever. A role of the flexoelectric effect is revealed here. Being invoked by strain gradients, flexoelectricity generates enough field to save the polar phase and turns the film into a polar state. The surface screening charges also influence the shape of domains. The weak screening creates a closure domain structure, whilst the strong one may turn it into a single-domain state.

The obtained dependencies show correspondence to the theoretical predictions and reveal more details about the interactions within the rhombohedral ferroelectric film grown on a substrate with a mismatch strain. The modelled system generally follows a theoretically predicted phase diagram over the mismatch values, however the flexoelectric effect is shown to play a crucial role in maintaining the polar state when the mismatch strain makes disappear. The elastic defects create a field that influences polarization components and modifies the shape of the domain structure. The desired effect can be controlled by carefully choosing a type and a concentration of the defects. The surface screening can be a powerful effect helping to control polar phases by setting screening charges. Overall, the obtained results further the knowledge about effects occurring in the rhombohedral ferroelectric thin films.