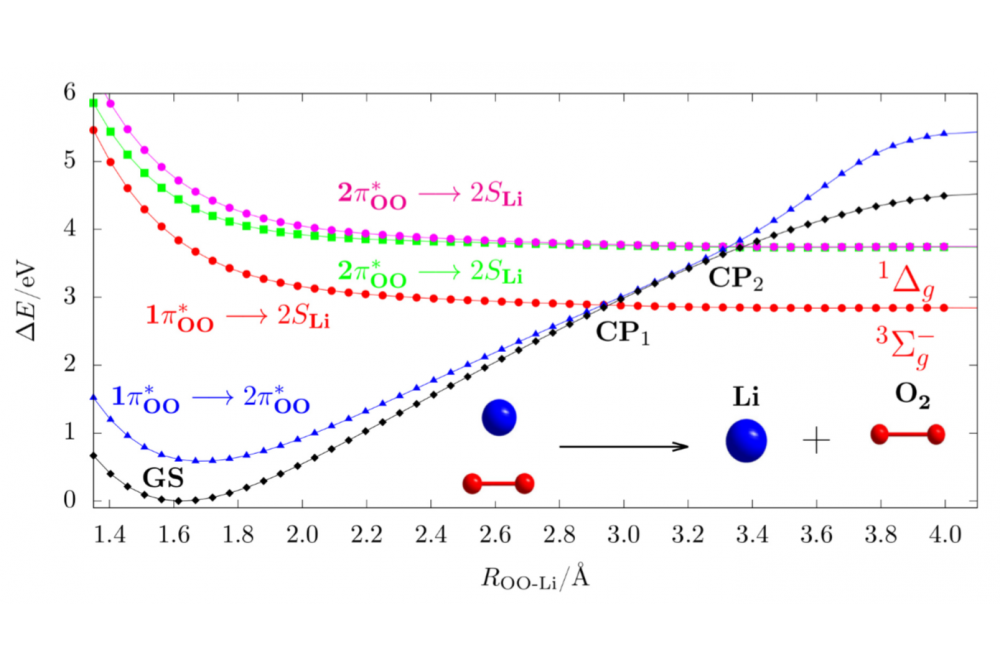 Potential energy surfaces and curves have been calculated to consider molecular and electronic structures of the model systems. The potential energy curves contain crossing points (CP) between the groundstate (GS) of the molecular superoxides and excited states during the dissociation path. In case of alkali superoxides the dissociation preferable leads to molecularoxygen (singlet or triplet) and the alkali atom:

Molecular peroxides can dissociate to either superoxides as intermediates or directly to oxygen and metal dimers Li2-Na2. The later described dissociation path demonstrates two electron transition processes and crossing points between different electronic states, which lead to different products. The potential energy curves of lowest electronic states for the dissociation LiO2 → O2 +Li are shown in Figure 1.

For a fundamental understanding of the chemical processes of the charging process in lithium oxygen batteries,we considered the reaction from molecular superoxides and peroxides to oxygen and the alkali metal. The dissociation of the superoxides leads over two different crossing points either to the thermodynamically preferred triplet oxygen or to the energetically higher lying singlet oxygen formation. The molecular peroxides dissociate directly to a metallic phase and the oxygen molecule or more probably to the superoxide intermediate.

The theoretical research with multi-reference methods of molecular superoxide and peroxide systems has given detailed information about the reaction mechanism, which can be used to improve the battery performance by developing avoiding strategies for side reactions.